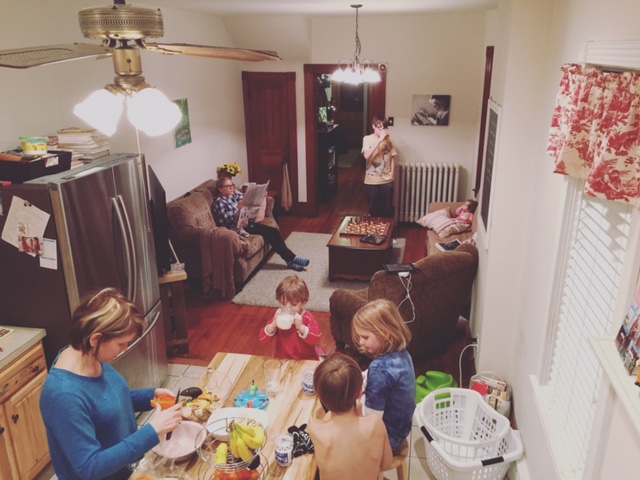 When Father David said what he said on Sunday morning, I immediately grabbed the pen my daughter was drawing with and scribbled his quote at the top of my bulletin. “Hey!” she hissed in quiet protest. Lucy and Cade looked over my shoulder to see what I was doing, what I had stolen from Abra. When I finished writing down Father David’s words, I handed the pen back folded the piece of paper, and tucked it into my pocket. Those words were like a promise to me, like some kind of blessing.

Two years ago, I read a blog post by Ann Voskamp that left me in tears. When Maile came home later that evening, I made her sit down and read it, too. We soaked in Ann’s writing, suddenly aware, awake, to a small part of what was going on in the Middle East, and we were shattered. Empty. We did what we could, we gave what we could, but for the last two years, ever since reading that post, I’ve felt a holy kind of restlessness whenever I thought about the Middle East. It felt, and continues to feel, intensely personal.

We all know this sense of helplessness, right? In a world where we see every tragedy, where we witness every injustice, how can we feel anything but helpless? Well, I found a small way to beat back the helplessness, and for me it came in doing small things, whenever I could. You might find this useful, too, when you’re drowning in helplessness, in a sense of smallness.

Ever since reading Ann’s article two years ago, I’ve felt a kind of irresistible pull towards that region of the world. Sometimes I’ve felt impatient to get involved – What’s taking so long, God? At other times, I’ve been content to sit back and wait – after all, our life is busy, and the days fall over each other in their passing. Months get swept away. I can hardly believe two years has passed since I first read that blog post.

Still, there was this invisible trajectory, inevitable in its motion. I think the passing of this time, all these days and weeks and months, have been a grace, God’s way of easing Maile and I into a new movement, one that at first might have been difficult to accept had we not been given so much time for it to grow. I think God knew that if he gave us this opportunity too soon, we might mistakenly pass it up out of fear or practicality or uncertainty. But God gave us time. Two years, to be exact.

I continue to be amazed at God’s adept use of time in my life, this insistence that I wait, that I not have everything precisely when I want it. I’m beginning to think it might be God’s greatest talent, this use of time, this creating of holy space, this invitation into the waiting.

Finally, the penny dropped. I spoke with my agency about a potential project, and that led to a phone conversation with the potential client. I researched her story and what her organization is involved in. What I didn’t expect was the question that came next.

“Would you be willing to travel to Iraq to see the work we’re doing first hand?”

I called Maile as soon as I got off the phone.

“The client wants to know if I’m willing to travel with her to see the work they’re doing.” Maile was quiet on the other end of the line. “So, where do they want you to go?” she finally asked, laughing nervously, because somehow she already knew.

“You’ll never guess,” I said, also starting to laugh, for no reason. We were both giddy with nerves and a sense that what we had dreaded and wanted was upon us.

“Iraq,” she said, and we both stopped laughing. We both grew serious.

“Take your time and think about it. We both have to be okay with this.” I paused. “We’ll talk when I get home.”

Later that day, I walked straight up to the bedroom, past my kids’ greetings and requests for food and shouts to arbitrate some new disagreement. I went up the stairs, back the hall, and into our room, where Maile was folding clothes on the bed and seven-month-old Poppy was sitting, proud of herself, happy to see me.

I started talking, but Maile held up her hand and smiled and there were little seeds of tears in her eyes.

“You’re going to Iraq. We both know it. We’ve both seen this coming for a long time. And I’m okay with it. I don’t know how, or why. But I’m not even worried. It’s the next thing.”

A few days later, Maile and I were up in the study. Through the narrow window, I could see this little city we’ve grown to love. We gathered the kids into the room and they sat down, some on the chair, some on the floor, some on us. We have six, you know, and everyone was there except Poppy.

“To write this book, he has to go to Iraq,” Maile continued. I nodded.

“Is there a war going on there?” Cade asked.

“There’s a lot of conflict,” I conceded. “They’re working on getting rid of ISIS.”

“Is it dangerous?” Lucy asked.

“It’s not the safest place in the world,” I said, shrugging. Maile laughed.

“It is a dangerous place,” Maile said, “but here’s the thing. This is right in line with the purpose of our family. We are adventurous. We try to stand up for people being persecuted. We live differently, or we try to. And when God opens up an opportunity like this, we say yes.”

Maile paused. It was quiet there in that third-floor room.

“Daddy has the opportunity to shed some light in the darkness. He has a chance to share stories people might not otherwise hear.”

Our five oldest kids, including Leo, stared at Maile as if she was explaining the meaning of life. Their eyes were round, their mouths stretched in serious straight lines. I was glad Maile was talking because I felt myself getting choked up. I don’t know if it’s possible to plan a trip to Iraq without at least considering the possibility that you might not come back.

“So Daddy is representing our family, what our family stands for. And that’s why he’s going.”

This writing life, this crazy, beautiful, unpredictable writing life, has led me to so many wonderful places: Sri Lanka, Istanbul, an Iranian community in Los Angeles, middle-of-nowhere Indiana, a Navy SEAL’s house in Maryland, and so many others. I’ve read the sacred diaries of a young woman who committed suicide. I sat across the table and became friends with a father whose young son committed triple homicide. I’ve witnessed firsthand the ridiculous power of forgiveness.

And now, in a few weeks, Jordan and Iraq.

Tonight, I came back early from driving Uber because I’d rather watch some basketball with my son than make another $20 or $30. When facing a trip to a place like Iraq, I am reminded that time is a non-renewable resource. I suddenly see how limited it is, how we hold it without any guarantee, and I find myself spending the minutes more deliberately.

At one point I went into the bathroom and there, on the sink, was my bulletin from Sunday. I unfolded it, square upon folded square, and there at the top were the words I had written down, Father David’s words.

So, I go, and do what I’ve been created to do: tell stories, mine, as well as the stories of those who cannot tell their own. And I represent Maile and my kids and all of us who believe Christ was not about worldly power or cultural success or being first, but about being last, about taking up an Iraq-shaped cross, and going, even when it doesn’t always make sense. Or when it makes perfect sense. And I carry with me the phrase of Father David:

20 Replies to ““Live a Little More Beautifully and Dangerously, as Christians Should”: Some Thoughts on Going to Iraq”