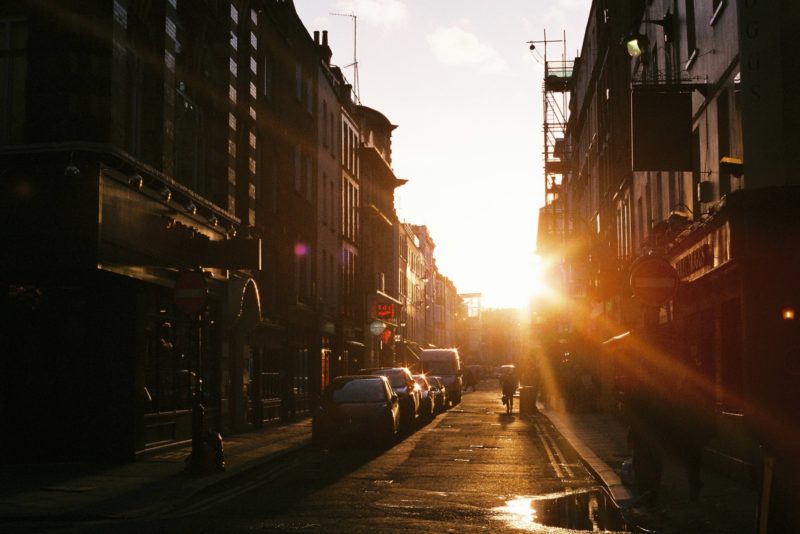 I started driving early on Thursday morning. My brain wasn’t completely awake, so when the girl asked to go to the subway on Queen Street, I did a double-take. I honestly wondered, the subway? Since when did Lancaster have a subway? It dawned on me, as I drove, that she was talking about the sandwich shop. She seemed young to be opening a business for the day, but there she went, taking out her keys, unlocking the door, letting herself in. The morning was still dark, and I know that feeling. For four years in England I was opening quiet shops before London was fully awake.

Later, there was the girl who argued with me about the fare being charged to her credit card – I don’t set the fare and have no way of changing it. There was the college kid who graduates this spring and can’t decide if he wants to return home to San Francisco or move to New York, where all his friends are headed. There was the quiet, reserved girl who erupted with joy when I put Jason Isbell on the radio.

There was the Indian mother and her son who I drove to school. She was so tender with him, commenting on what a nice day it was, asking him if he had everything he needed, reminding him to work hard. She asked me to drive her home, so I did. She couldn’t believe her school was offering Mandarin.

“It’s so difficult,” she said quietly. “It’s so precise.”

Some of you will remember that a few months ago I met with a Syrian man, a refugee who lives here in Lancaster, to begin collecting his story in an attempt to perhaps write a book about him and his family’s trials in getting to the US. January has been busy, and I haven’t been able to follow up with him. Until a few days ago, when I called and realized his phone wasn’t working. The only other way I had to contact him was by going to his house, a place I’d never been before.

Just in case you don’t know me, let me tell you this: my preferred method of communication is text or email. A distant second is by phone. In third, so far from first you can barely see it, would be actually showing up at someone’s house I barely know. But I really wanted to set up another time to talk with him, so, when one of my fares took me into that part of the city, I swung by his home.

Two of his sons met me at the door – they were perhaps 10 and 18 years old. Just a guess. The 10-year-old was the most take-charge kind of kid I’ve ever seen, and I wonder if it’s from being the one who speaks the best English. I can imagine him taking care of everything for them: talking to the cable guy, going along to the grocery store, asking questions when they are out and about.

“Is your father here? I’d like to speak with him,” I said hesitantly.

“Come in, come in,” the 10-year-old insisted, holding the door open firmly in that overwhelming sort of hospitality you only find in Middle Eastern people. Their determination to show kindness exceeds any other culture I’ve spent time in.

So I went inside and their mother came into the room and the boy rattled off some commands to her and she handed him her phone. I assumed he was calling his dad. He pushed the phone into my hands.

“Hey! Hello!” I said into the phone, a little disarmed by the situation. “How are you? Yes? Can we get together?”

Their father told me that he had found a job, and he sounded ecstatic about it. No, he could no longer meet during the day. Yes, he would love to hang out again. Perhaps some evening? He gave me his new number. I said I would call in the next few days.

The entire time I was on the phone with him, his 18-year-old son was insisting I sit on the sofa. He beckoned towards it like a salesman. Make yourself comfortable. You don’t have to stand here in our home.

“No, thank you,” I whispered, smiling. When I finished talking, his 10-year-old took back the phone and walked me out to my car in his socks, grinning the entire time.

“Thank you,” I said. He nodded and smiled, an embarrassed grin, and then he sprinted back to his house. In that moment he reminded me of my own son.

I thought of their family the rest of the day while I drove. I felt for them – they come from a culture where community is everything. Everything! And now here they are, far from home, in a place that politely declines to sit down on their sofa, no matter how hard they insist.

The quiet mother. The accommodating sons. The father ecstatic to have a menial job. I wonder if this city knows the blessing it is to house people who have been through so much, whose only concern is making their way in this new life, who gather together at their own table at the end of the day and share their new adventures. I wonder if this city knows how good it has it when families like this are given a chance at life, right here on these crumbling streets.

I started a new Facebook page to house all of my Rideshare Confession posts. Head here to see them all in one place and, while you’re there, do me a favor and Like the page?

2 Replies to “When I Looked For the Syrian Refugee at His House, and What I Found #RideshareConfessional”