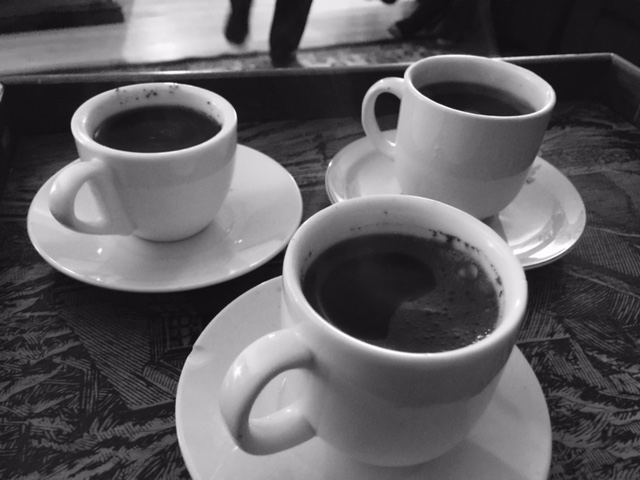 “Did you hear about the refugee concert in the city tomorrow? Do you need a ride?”

I pull up outside a small duplex in the southwest side of Lancaster City. Mohammad comes outside with three of his boys. His oldest boy is with his mother – she is learning to drive. Mohammad is all smiles as he shakes my hand and we herd the three boys into the back of my Suburban. They jump in, giddy at the adventure.

We drive into the city under a pale blue sky. We park and walk through the cold January day to Tellus360, the venue for Church World Service’s refugee concert. The place is packed, and we still have an hour until the festivities begin. I talk with one of the CWS employees.

“I was going to go pick up Mohammad,” he tells me, “so I called him, but he said, ‘No, I have a friend picking me up.’ I said, ‘Mohammad, who is this friend?’ I didn’t know he had friends who could bring him into the city.'”

We both laugh. This is what it means to be a friend in the 21st century, I think. As simple as that.

Soon a line of reporters form to interview Mohammad. Everyone wants to talk to the Syrian refugee, especially in light of the recent executive order.

And this is where I say that if you do not know refugees, it is easy to hear the EO and think, “What’s the big deal? It’s only 120 days.” But if you know refugees, if you know people who have been trying for years to get permission to come and  are now afraid they must start the process over, if you know people who are in danger because they’ve translated for the US military in the Middle East and now they cannot flee, if you know people who only want to be reunited with their children, or their spouse, or their parents, only then, perhaps, can you know why some of us have been heartsick this weekend. Why we have lost sleep. Why we wake up with a gnawing sensation in our gut, that the country we love has forgotten how to love some of the most vulnerable.

I stand back and I watch as Mohammad tells his story over and over again. His boys crawl all over him. The lights are bright in his eyes. Behind him, through the glass, I can see the entire city of Lancaster. This is a world away from where he came from. A world away.

Tellus360 is so packed I can’t even walk from floor to floor. It seems the entire city has shown up to give their support. Volunteers cross paths with refugees they knew from years ago. It is a beautiful thing, seeing so many cultures mingling, so many different races smiling and hugging and welcoming one another.

I go back up and find Mohammad.

So I lead them through the mob – me, then the three boys, then Mohammad, following his sons, keeping them in line as they walk through a chaotic environment in their new country. We burst out into the cold and it feels good to be alive in that moment.

He claps his hand on my shoulder and his boys dart around us like butterflies.

He clenches his fist and clutches it to his chest.

We arrive at his house.

I look at the clock.

“I should really get home,” I say. I am, perhaps, a typical American. I do not feel immediately comfortable going into someone’s home who I do not know well, whose language I do not speak. I do not want to be an inconvenience.

I follow him inside and take off my shoes and we sit on his sofa. He tells me about his parents, in their 70s, too old to come to the US.

“When we fled Syria for Jordan,” Mohammad says, “My father told me he would rather die in Syria than travel and die somewhere else.” He smiles a sad smile and shrugs. I can tell he misses him.

He tells me about his recent escapades in buying auto insurance. He tells me how his new landlord came to him, found out about his life and how hard he was working, and gave him a $200 discount on the rent. Mohammad didn’t even ask for it.

“Until I am making better money,” Mohammad explains. “That’s what he told me. He is a good man. He is human.”

He gives me coffee, again, it is not a question of whether or not I want it – the only question is if I would like sugar or not. The sharp black liquid is good. Hours later, I still feel it in my veins, like a jackhammer.

“I really must go,” I say, and I put on my shoes, and he walks me out to the car. It is cold, and I see the boys through the window, drinking the remains of our coffee. My children do that. They are always asking for coffee. Amazing, how alike we are, though we were born 10,000 miles apart. Amazing, how we all want the same things: a quiet place to live; a way to make a living; hope for a future for our children. And peace.

Their grandfather chases them away from the small mugs of coffee. I smile.

“It was a good night,” I say. The streets are dark as I turn the car around. I pass him one more time, and he is on the sidewalk, in his socks. I beep the horn, he waves, and for a moment I feel like I am back in the country I know.

6 Replies to “How I Rediscovered the Country I Know #WeWelcomeRefugees”