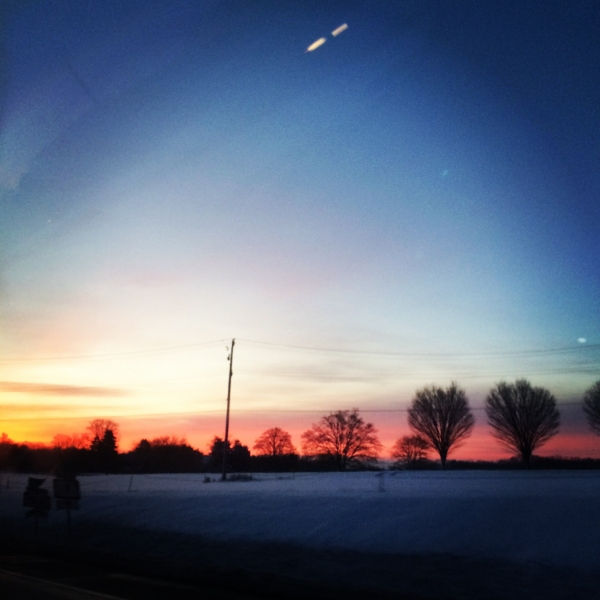 Last Sunday afternoon I drove under gray skies, through rain that was soon to be sleet, to the funeral of a young man I went to high school with. His name is Peter. The calendar said spring was less than three weeks away, but there was another snow storm on the way. Canadian geese circled the fields, uncertain as to whether they should be heading north or south, which was kind of how I felt, driving to a funeral being held for a 35-year-old father of three. I felt disoriented, unsure which way to fly. These things aren’t supposed to happen. 35-year-olds shouldn’t die of cancer, leaving their wife and children and parents behind.

The Lutheran church was packed and just as I walked in they set up an extra row of chairs at the very front, which is where I sat. Then the family came in. Peter’s father was my music teacher in middle school. Peter’s uncle was my first baseball coach. We called him Mr. P. He taught me how to keep my elbow up, how to pitch with my fingers along the seams, how to turn my glove so the ball wouldn’t skip off my palm and hit me in the face.

Peter’s cousin, Johnny, was one of my closest friends, someone I’ve known since I was six years old. We grew up playing baseball together. He was the catcher and I was the pitcher and we created a series of signals – one for a fastball, two for a curveball, and three for an off-speed (even though every pitch I ever threw pretty much did the same thing). I remember how the seams felt against my fingers, rough and spinning out of control. I remember how I accidentally hit my fourth grade girlfriend in the hand while she was batting for the opposing team. I remember how she came to school with a splint on her finger. I gave her a jar of root beer barrels for Christmas later that year.

While I was never extremely close to Peter, his family always formed a backdrop to my existence, like the mountains do for those who live in California – always off in the distance, always there. Peter’s older brothers were the cool upperclassmen. His father introduced me to John Denver. His uncle taught me the great American past time.

I saw them all walk in, single file, and sit in a pew across the way from me. All of them with their families and their children. Then Peter’s wife came in and sat down, her two little girls dressed in beautiful dresses, one of them looking exactly like Peter. They didn’t cry. They were too young to understand the weight of such a moment. They giggled at something, then sang with all their hearts when the hymns were sung. At some point in the service they got down on their knees and colored on papers, the pew serving as their desk.

She’s a wonderful mother who lets her children smile and draw pictures at their father’s funeral. There was so much I learned in that moment about life and death and creativity. So much.

One of my favorite scenes from The Lord of the Rings movie is when Frodo offers the Ring of Power to Lady Galadriel. He is already tired of carrying it, and the mission feels impossible to him.

Have you felt that before, the weight of life, the heaviness of being? Perhaps you feel it right now, this very moment. The downward pull of discouragement or sadness or death. Pain. Hopelessness.

Galadriel seems intrigued by Frodo’s offer, and as she imagines what it would be like to wield the Ring of Power and be in complete control of everything, she grows large and ominous.

“You offer it to me freely?” she asks. “I do not deny that my heart has greatly desired this…In the place of a Dark Lord you would have a Queen! Not dark but beautiful and terrible as the Morn! Treacherous as the Seas! Stronger than the foundations of the Earth! All shall love me and despair!”

It is so easy to convince ourselves that great power would not tarnish us as it has so many others. I am different, somehow. My resolve would hold. I would be fair and wonderful.

Just as she is about to take the ring, something inside of Galadriel changes, and she seems relieved as she turns down Frodo’s offer.

“I have passed the test,” she says. “I will diminish, and go into the West, and remain Galadriel.”

At one point during Peter’s funeral the Lutheran clergy led us through communion. It was a beautiful moment, watching so many of my old high school friends and teachers and absolute strangers walk to the front.

“The body of Christ, given for you.”

A small piece of bread.

“The blood of Christ shed for you.”

A sip of wine from a single cup.

There was something disarming there, walking slowly in a long line, taking part with so many others. There was a healthy diminishing, a coming back into line with who I truly am, not who I’m so often striving to be. There was, for the briefest moment, an understanding that I am not the center of everything.

I sighed, and I looked over at Peter’s family. They watched the crowd receive communion. There was wonder on the children’s faces, as if all of these people were doing this for their father. And in many ways they were right.

Every so often, I read through Brennan Manning’s book, Ruthless Trust. Maybe once a year. This time one particular quote pierced me to the marrow.

“The way of trust is a movement into obscurity, into the undefined, into ambiguity, not into some predetermined, clearly delineated plan for the future…The reality of naked trust is the life of a pilgrim who leaves what is nailed down, obvious, and secure, and walks into the unknown without any rational explanation to justify the decision or guarantee the future. Why? Because God has signaled the movement and offered it his presence and his promise.”

I realize that there are areas of my life where I do not trust God. One of them is my writing. I am determined to follow any predetermined, clearly delineated plan that I can find. I listen to all the gurus who say this is how you build a platform, this is how you gain an audience, this is how you get a book deal. I resist obscurity. I want future guarantees.

So, for a time, I’m walking away from the clearly defined path. I’m going to take a break from social media, the main driver of traffic to my blog, and I’m going to simply write. No sharing. No endless Facebook promoting. No mind-numbing Tweets.

I don’t say this to criticize what others are doing. There are some excellent bloggers out there making an amazing difference in the world, and receiving their status updates and reminders has always been a pleasure. I think that by being on Facebook and Twitter they’re making the world a better place. But for me, the time has come to walk a different path, even if it doesn’t make sense or appear to head in the direction I’ve always wanted to go.

I’ll still be posting here every Wednesday, so I hope you’ll join me. I’ll still occasionally send out emails to those of you on my list, updating you on my latest projects or letting you know what some of my writer friends have been up to. I’d love to get emails from you, anytime: shawnsmucker(at)yahoo.com. But after today I won’t be on Facebook, Twitter, or Instagram, at least not for a little while.

It’s actually a huge relief, the diminishing. The trusting.

What unorthodox path are you being called to follow?

44 Replies to “It’s Not You, It’s Me: On Attending the Funeral of a Friend and Saying Good-Bye to Social Media”