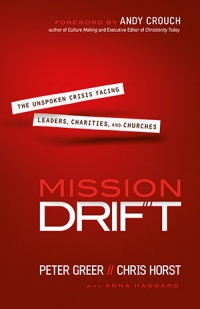 For the next few weeks, I’ll be highlighting a book here every Monday. So drop in if you’re looking for a good read – you might even get a chance to win a free copy of the book being highlighted.

Peter Greer, the President of Hope International, is a great friend of mine. His latest book, Mission: Drift, is one you’ll want to check out if you are a pastor, leader, or business executive concerned about the mission of your organization and the direction it’s headed.

Here’s an excerpt (and if you’re interested in winning a copy, simply leave a comment – I’ll draw one lucky winner later in the week from the names of those who comment on the post):

A Street Preacher and an Oilman

Tycoons Howard Pew and Henry Crowell had much in common. Both were titans in their industries, Pew in oil, Crowell in food; renowned for extraordinary generosity, and bold in their Christian faith.

But the legacy of their foundations provides a fascinating case study in Mission Drift.

Billy Graham was a risk-taker. And so was oil magnate Howard Pew. Which is what made their partnership work.

In 1955, Graham sat down with Pew in his Sunoco Oil headquarters. He laid out his vision for a magazine of “evangelical conviction.”

This historic meeting led to the launch of Christianity Today.

“I came to have great affection and admiration for him,” Graham said, “not because he had a great deal of money but because he was a man of God and a man of wisdom who wanted to see his wealth used wisely for the cause of Christ.”[1]

Not only partners, Graham and Pew became friends.

When Pew died in 1971, Graham spoke at his funeral. The Pew Charitable Trusts paid homage to Pew’s friendship with Graham, donating $3 million toward the construction of the Billy Graham Memorial Library.[2]

Unfortunately, since the founders died, the Pew Charitable Trusts has taken a U-turn. And it’s received significant public scrutiny because of its departure from Howard Pew’s intentions.

In recent years, the Pew Charitable Trusts have made major gifts to organizations like Planned Parenthood and many of the Ivy League schools Howard Pew eschewed.

The drift has been so marked that one author described it as “the gravest violation of donor intent.” [3]

In other words, the Pew Charitable Trusts hasn’t done what Howard Pew founded it to do.

In stark contrast is the example of another titan of commerce, Henry Crowell, founder of Quaker Oats.

A friend once asked Crowell how much he gave, in sum, toward charity.

But records show that for more than forty years, Crowell gave away over seventy percent of his income.

What motivated Crowell was the advancement of the Gospel. While Billy Graham had been Howard Pew’s partner and friend, evangelist D.L. Moody was a close ally and friend for Crowell. Crowell supported many of Moody’s ministries, as well as served as chairman of the board for Moody Bible Institute for over forty years.

Crowell knew that, unguarded, his wealth would be disbursed to a number of worthy causes, but not toward the cause he cared about most: Jesus.

So Crowell intentionally wrote safeguards into the charter of The Crowell Trust, which gave to faith-based institutions.

Consider one safeguard that is still practiced annually. Trustees gather to observe a rather particular tradition written in The Crowell Trust’s charter: first, they begin in prayer. Next, they read—aloud—the mission and vision Henry Crowell himself wrote. They read his words and meditate on the vision God gave him before starting official foundation business.

From the outside looking in, the tradition seems almost comical: a group of high-powered executive leaders sitting for three hours while reading aloud to one another. But it is a practice demonstrating a defining characteristic of Mission True organizations: They proactively protect their mission, understanding that every organization is susceptible to drift.

“Many folks come into the Crowell Trust and tell me that Crowell is one of the few trusts that have stayed true to its indenture,” noted Candy Sparks, current executive director of The Crowell Trust.

Henry Crowell attended to details. He placed guardrails around the vision and funds God entrusted to him. In contrast, Howard Pew’s successors took his intent and replaced it with their own.

The Pew Charitable Trusts today fund many admirable causes. But their priorities bear little resemblance to the convictions and legacy of Howard Pew.

The problem isn’t the mission of the Pew Charitable Trusts today. The problem is with the blunt change of course.

Leaders are responsible to remain faithful in safeguarding the mission of their organizations.

·      Have you taken steps (like Crowell) to protect what matters most?

Peter Greer and Chris Horst are the coauthors of Mission Drift, a book about the importance of faith-based organizations retaining their religious identity as they grow and professionalize. Greer and Horst serve as executive leaders of HOPE International, a Christian microfinance organization.

Disclosure: I received a free copy of this book.

2 Replies to “BOOK OF THE WEEK Mission: Drift”