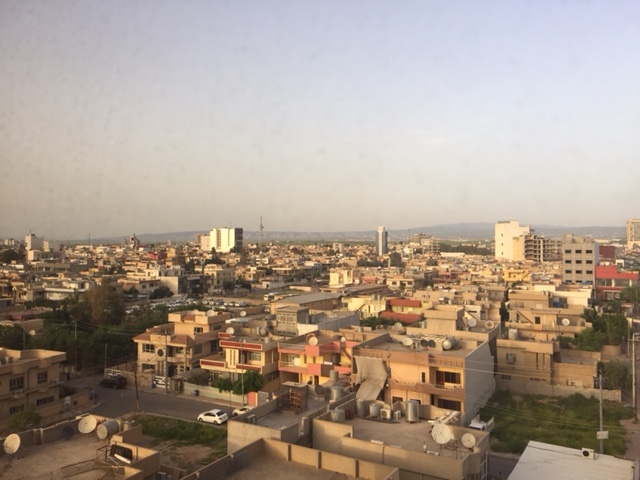 There was an Iraqi man sitting next to me on the plane as we approached Erbil. He motioned towards the window.

“I love seeing Erbil at night,” he said, looking down on the lights. He sounded like a man talking about a woman or his childhood home. He looked at me, alarmed, as if suddenly abashed by some lack of manners.

“Have you been here before?” he asked.

“Come, come over here!” he insisted, unbuckling his seatbelt. “You have to see! Take my seat.”

“No, no,” I said, smiling. “That’s okay. Really.” But he wouldn’t take no for an answer. He stood and pushed passed me into the aisle so that I could slide over into his chair and watch our descent into Iraq. It really was a beautiful site. Erbil spread itself out in shining white lights, hemmed in by the pitch black mountains. It looked like any other city I had flown into before – serene, busy, like an outpost surrounded by darkness.

“Thanks,” I said. “It’s beautiful.” And he smiled, looking rather pleased with himself.

No, I had to go to Iraq and hang out with Muslims to receive that kind of radical hospitality.

We arrived at our hotel around 5am. We slept until 7am. Had breakfast. Glided into a day-long security training session at 8:30am. Had to prop eyelids open with toothpicks. What I caught from the lesson was this.

The road from Erbil to Mosul, along with the abandoned buildings in Mosul, were lined with thousands of old mines and IEDs that had yet to be disarmed. Our plan was to travel to the outskirts of Mosul two days later.

ISIS will sometimes put toys in the middle of the road for children. These toys are attached to explosives.

Do not leave the road. Do not walk into abandoned buildings. Do not step on rocks that are out of place.

Photos of people who have stepped on landmines and experienced traumatic amputations are images that will stay in your mind for a long time.

I slept well that night. I woke up early the next morning. My body had no idea what time it was – too many late nights in a row, too many long days, too many time zones crossed. I had to believe the clock, and the sun, knew what they were doing.

We ate breakfast on the sixth floor of the hotel. The entire wall was glass, and we looked out over Erbil. Again, I was surprised at how normal the city appeared. There weren’t car bombs going off every day; there weren’t mortar rounds falling from the sky. There was traffic, and people opening their shops for the day, and a bell hop who insisted on helping us out the door to our waiting van.

So began our first day in Iraq. We planned on driving two to three hours north, into the mountains, to a remove valley lined with eight Christian villages. It would be many miles on the road, and many checkpoints. I felt a little bit anxious, leaving the safety of Erbil. We climbed in the van, and off we went.