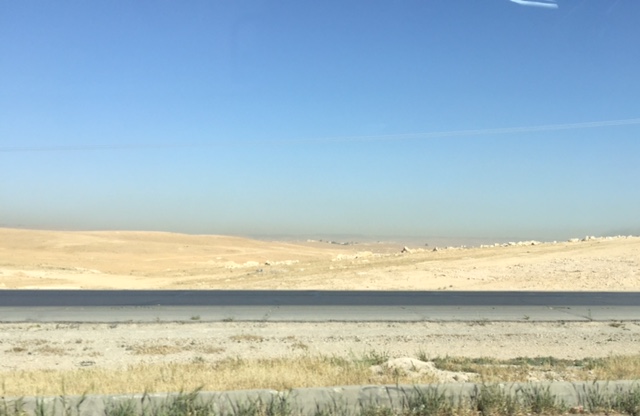 The drive from Amman, Jordan, north to the city of Mafraq (also in Jordan) is a journey from the (vaguely) familiar into the foreign. Amman, at first glance, is a modern city, but as you drive north, the streets begin to fade, turning gradually into wilderness. Soon, the highway is the only man-made thing for as far as the eye can see, splitting a white-tan horizon blurred by distance. On either side, the occasional shepherd wanders with his flock over the rocky hills, though it is impossible to see how anything could survive for long in that landscape.

After a few hours’ drive, the city of Mafraq rises up out of the wilderness, the buildings the same color as the pale rock. Initially, Mafraq opened the door to a small amount of fear in the back of my mind. It came to me in the narrow, back streets, the hard stares, and the impenetrable dark eyes. I had to calmly talk the fear down.

But then I met the people.

There is a pastor in Mafraq whose church is a magnet for volunteers. Over 1,200 people come through his church every year from all over the world, looking to serve the people of the city as well as the refugees who have ended up there. The city’s population of 80,000 has been joined by 100,000 refugees spilling across the Syrian border, yet this church welcomes them. They distribute food and heaters and blankets to the new arrivals. They even started a school that now holds nearly 120 Syrian refugee students who would otherwise receive no education. One of Reload Loves playgrounds is at the school, and we were able to speak to, and play with, the children there.

Back at the pastor’s church, we were invited to attend one of the many women’s classes they offer to the city. This one was heavily attended by Muslim refugees, mostly from Syria. It was a class on forgiveness.

I walked in, and even though I was with the pastor, I felt very out of place. The women quickly scrambled to put up the head coverings of their burqas, and soon all that was visible through the slit was their kind eyes. A teacher spoke to them in Arabic about forgiveness, with the pastor whispering the interpretation into my ear. Many of the 25 women nodded as they listened. A few of them cried quietly.

Lenya was given the opportunity to speak. She thanked them for welcoming us. She asked if they would mind sharing their stories so that we could go back to the United States and bear witness to all that is going on.

One woman raised her hand. She wore a covering that draped down over her head and came up tight under her chin, but her face was visible. When she spoke, it was in a quiet voice, with very little emotion. The interpreter told us what she had said.

“My son can no longer walk. He was shot in the legs by a sniper. My brother was tortured for many weeks, and he can no longer function.”

One by one, the women told us their stories.

“My husband was killed,” another woman said, tilting her head to the side as if to ask us how this could be true. “And I have five children.”

“My husband went back to Syria three months ago to try to find some important things we left behind,” another woman said, “but he has not returned. I tell the children he will be home soon.”

She stared down at her folded hands.

We stood on top of the school building and the call to prayer went out over the city. A small truck approached the school, and a man shouted from it into a megaphone in Arabic. His voice sounded scary, as if he was rounding up the entire neighborhood to hunt us down.

“What’s he saying?” Lenya asked one of our hosts.

“He’s selling vegetables from his truck.”

I stared out over the city. I wondered how much of our mutual fears came simply from a complete lack of understanding. I could see Syria from that rooftop, its mountains rising. I wondered how this little church in Mafraq could be so welcoming and courageous and generous, while so many of us comfortable brothers and sisters in America can be so afraid, so focused on self-preservation.

I wonder, what will we do with all of our stuff when we are dead?

We returned to our hotel, and a security guard walked around our van with a mirror attached to a pole so that he could examine the underside of our vehicle for explosives before letting us back into the parking lot. We had only a few hours to sleep before we boarded our 2am flight to Iraq.