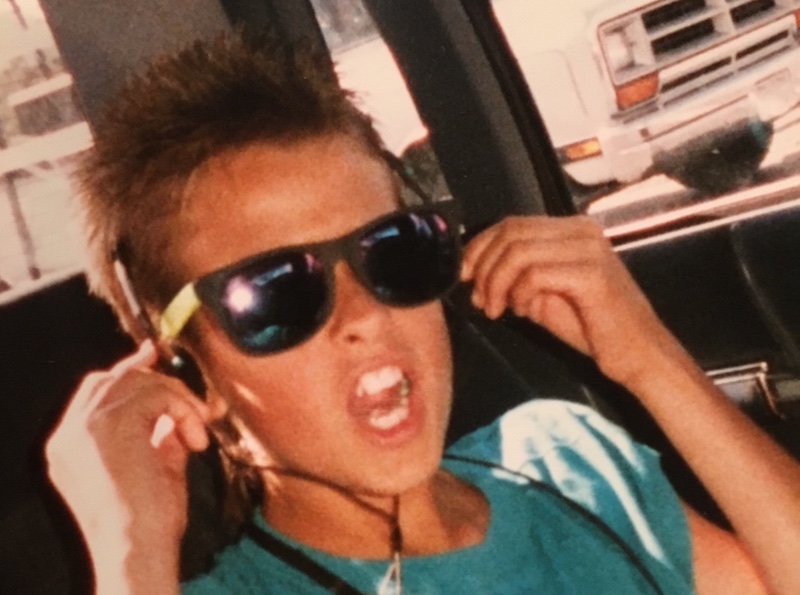 Back in early June, I sent my literary agent a text. We were expecting to hear a final decision from the publisher on Tuesday. It was Wednesday. I felt like so much depended on this. So many years. So many words.

In the dog days of August, circa 1985, I was a skinny 8-year-old reading The Lion, the Witch, and the Wardrobe on the farmhouse porch, waving away the flies. Cows mooed in the background. The thing I hated the most was mowing the lawn, or anything else that interrupted my reading.

We had no air conditioning in that massive farmhouse, only a handful of huge box fans to move the warm air around, and on especially hot nights I’d sleep on the floor in front of one of them, the loud hum drowning out the world. I attached a sheet to the fan so that it blew up around me in a dome shape. It was like sleeping inside of a cloud.

I read under that dome with a flashlight until long into the night, the pages flapping back and forth in the gale force. It was like my own world, my own universe. There was the smell of the farm, the scratchiness of the carpet, the weariness of my eyes growing heavy. There was nothing else.

I devoured books in those days. I drank them down straight. The best of them left me in something like a buzzing stupor, and I wandered the farm for weeks after finishing, drifting through the beautiful trance they left me in. I sat by the creek, fishing, and my mind followed the water, meandered all the way to the sea.

I felt a tangible ache for Narnia. I opened every closet twice, quickly, and peered deep into the darkness, hoping to see snow-laden branches or hear the voice of a faun.

In college I dove deep into writing. It started out as journaling, moved into poetry, and occasionally stumbled into a few, halting efforts at novels. I spent afternoons beside the Yellow Breeches, a narrow stream that wound its way through our campus. I wrote in pencil then. Words and words and words in a little red notebook I found in the basement just the other day. The eroded red notebook was hiding between old yearbooks and containers holding floppy disks. The words are barely visible now, rubbed raw by all those years, all those moves.

I wrote the first paragraphs of at least twenty novels that never went any further (I wonder about all of those characters, where they went, what ever happened to them). I wrote a fair amount on three novels, got far enough to realize I didn’t know what to do with the middle part. There was something about that section of a story that always felt awkward, always trailed off into mumbled plot lines that never recovered. I became bored writing them and figured that meant someone would get bored reading them. I set them aside or threw them away.

I finished writing one novel in those days, very short. Very not-good. I might know where it is, but I’d rather not look at it. If I do find it, I think I’ll burn it ceremoniously. Maybe on a floating bier.

My writing road, like most people’s, has been long and winding. For the last 17 years I’ve experienced mostly rejections: I was rejected from at least five MFA programs (at least five – I’ve lost track), numerous literary journals, countless agents, and a series of publishers. I’ve kept many of those rejections in a file folder somewhere. I don’t know why. Maybe because they’re like scars? Maybe because I still want to prove them all wrong? Maybe because they make up this long, winding road I’ve traveled?

I broke into the publishing world seven years ago with the publication of a book I co-wrote, and that led to a lot of opportunities. In the following years, I self-published three books and co-wrote another fifteen, but my dream was still to have a publishing house publish my fiction. My own stories. Ever since I was 8 years old, under that sheet dome in the middle of the night, reading The Lion the Witch and the Wardrobe or A Wrinkle in Time, ever since then I’ve wanted nothing more than to make up stories, write them down, and have people read them.

I don’t know. I’ll have to think about that one. Maybe it’s because, to me, that’s the most real sort of magic I’ve ever encountered. I want to do it, too. I want to make that magic.

Four months ago, we started sending a book proposal for The Day the Angels Fell to publishers. That’s the book you all helped me self-publish through Kickstarter at the beginning of 2015. I think my agent sent the manuscript to 15 or 20 acquisitions editors. You can read about that process HERE and HERE. And that came with it’s fair share of rejections.

As one editor put it,

“Much as I like the voice, though, I’m afraid the story overall just doesn’t feel quite right for us.”

It was a long, hard wait, and towards the end I got impatient. I felt like the road I was on had leveled out and would never change. I was ready to move on with my life, chalk it up as another failure. But my agent, Ruth, kept encouraging me.

“Just give it a little more time,” she said.

Then, a spark of light. An acquisitions editor liked my book. She loved it. She wanted her publishing house to take it on. We spent the better part of an afternoon talking with her, hearing her dreams for the book. I don’t think I said much. I was in shock. Someone who believed in my writing as much as I did? Someone from a publishing house who had fallen in love with something I had written?

“I’m taking this to my publication board next Tuesday,” she said. “And I’m hopeful that after that meeting, we will be making you an offer to acquire The Day the Angels Fell.”

Tuesday came and went. By Wednesday, I still hadn’t heard anything. I sent Ruth a text.

“I have good news,” she said. I sat there quietly as she told me the story.

Revell, a division of Baker Publishing Group, was offering me a three-book contract which included re-releasing The Day the Angels Fell, publishing the sequel, and publishing a third book of fiction, to be determined. I was shocked into silence. I couldn’t speak.

About ten minutes into describing the offer and what it meant, Ruth paused. She asked me a question.

“Are you happy with this?” There was uncertainty in her voice.

“Sorry, Ruth, I’m just in complete shock. I’m happier than you can imagine.”

Maile was listening outside the door the entire time. As soon as I hung up with Ruth, she came flying into the office.

I took a deep breath. I nodded.

“Are you serious?” she exclaimed. I told her the details. About that time, Ruth forwarded the offer letter to me.

“Here it is,” I told Maile. I started reading it to her, the opening note from the enthusiastic editor, Kelsey, who would now edit three of my novels. Here is one of the paragraphs:

When I initially read the first paragraph of The Day the Angels Fell, I was hooked. When one of our sales representatives read that same first chapter he emailed me immediately and said “this is something special.” Whether I’m reading what your fans are writing, listening to what my colleagues are saying, or am immersed in Sam Chambers’ world myself, I know that what you have here, in this book and in your writing overall, is exceptional.

The offer letter was so kind, so encouraging, so affirming of everything I’ve always tried to do as a story-teller. I got to the second paragraph of the offer letter when I was overcome with emotion. I sat down on the floor in the office, leaned my head up against the door frame, and sobbed.

“I don’t even know why I’m crying,” I finally said.

“You’ve been working towards this for years,” Maile said, laughing, still in disbelief. She sat down beside me. “This is it. You’ve finally done it.”

She took the computer from me and finished reading the letter out loud, and I sat there listening. It felt like she must be reading a letter written to someone else. I couldn’t believe this was for me.

I don’t think I ever would have gotten to this point without you, my kind and encouraging readers. For nearly seven years you’ve been reading my blog posts as well as the books I’ve co-written. Whether it’s the comments you’ve left, the emails you’ve sent, the reviews you’ve written, or the way you gave me overwhelming support when I self-published The Day the Angels Fell, your encouragement has propelled me forward on this journey.

There’s a long, exciting road ahead. We plan to release a hardback version (hardback!) of The Day the Angels Fell in the fall of 2017 (I know! That seems so far away!). It will be freshly edited and come with a brand new cover. For those of you who have been waiting for the sequel, The Edge of Over There, we’re planning to include the first few chapters of that book at the back of The Day the Angels Fell.

This is where I ask, once again, for your help. I cannot re-launch The Day the Angels Fell without your enthusiastic support. If you’re interested in being part of a fun group that will help me with the release of this book, sign up HERE. You’ll even receive a FREE ADVANCED COPY OF THE BOOK BEFORE IT RELEASES! In exchange, we’ll ask only two things: please review the book online, and help us spread the word during its release. You’ll also receive updates on our progress and provide important input on various things as they come up in the design and planning phase.

I’d love for you to continue to join me on this incredible ride. I promise I won’t email you more than once or twice a month. I won’t be sending these out in my normal newsletter, so if you can help with this book launch, please be sure to sign up HERE.

Now that the spike of excitement has begun to level off, I sit back and I wonder.

I hope you’ll keep walking your path. I hope you won’t give up. If I can do it, you can do it. I am no writing prodigy, no natural born success. I am simply someone who insisted on putting one foot in front of the other for a very long time. Someone who, with a lot of help from my writing community, refused to cave to the voices that told me I wasn’t good enough.

Maybe somewhere, that will happen. Maybe a kid (or an adult) will stay up late into the night reading about Samuel Chambers. Maybe this book, this story, will somehow become tangled up in their life the way all those wonderful books I’ve read have become tangled up in my own.

A writer can hope.

Remember, please sign up HERE to join the launch team and receive your free advance reader copy next spring/summer. For more frequent updates and other random stuff, you can “like” my Facebook page HERE. And whatever your current dream, keep going!