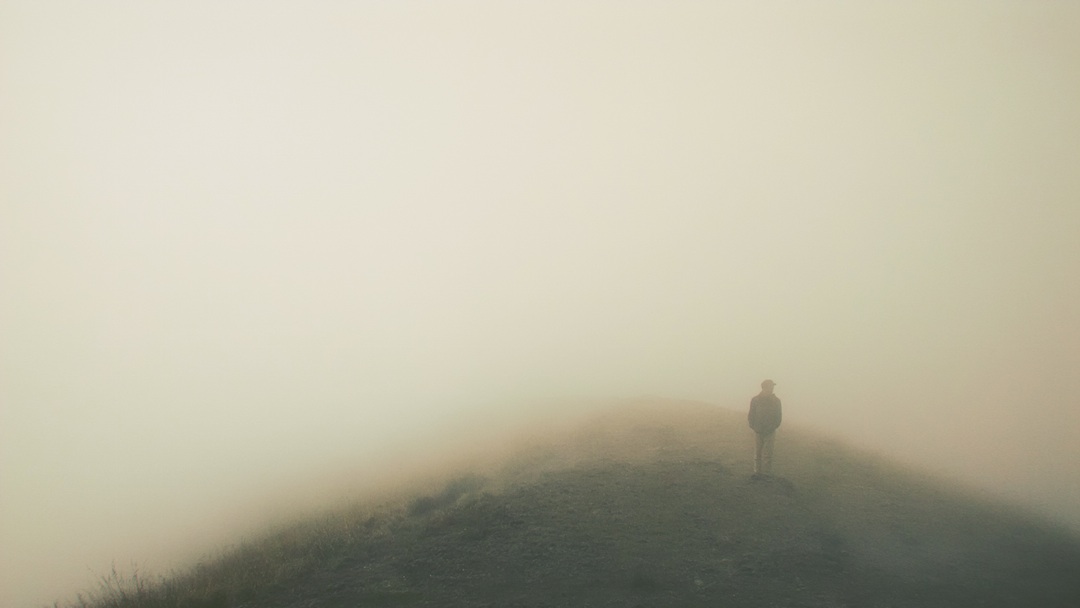 This post first appeared at Nish Weiseth’s beautiful old site, Deeper Story. I have an unbelievably fond place in my heart for that website and especially for the people who wrote there alongside me. I wrote some of my best material for Deeper Story, and what I wrote in this post three years ago is even truer today. There is a Ring of Power presented to all of us, and there is a quiet river, and ne’er the twain shall meet.

I took the trail I had never taken before, the one that bore off to the right and ducked through a small cove before clinging to the rocky edges of the creek. Clouds rolled in from the west, heavy with expectation. First, the distant role call of thunder. Then the chattering patter of rain drops on a million leaves.

The unfamiliar path went up up up to the top of the hill, but I was still blinded by too many trees. Then down the hill I went with huge, massive strides jumping from long-dead roots on to smooth rocks.

At the bottom, a train track, stretching north and south, bending into eternity. I crossed the tracks, passed through the last grove of trees, and there it was: the river.

My son rides his small tricycle around me on the deck while I write, the plastic wheels thump-thump-thumping over each and every deck board.

Give me space to think, I want to say. Take this noisy life somewhere else, at least for a few precious moments.

But I try to be a good father. I say nothing. And his noisy life grounds me in this moment, this August breeze, these smooth boards under my feet.

He crashes into one of the chairs on the patio. He looks at me. I smile.

There is a scene in The Fellowship of the Ring where Frodo offers the ring of power to the Lady Galadriel. As she considers what it would be like to be the most powerful being in existence, she grows large and dark and fearful.

“In the place of a Dark Lord you would have a Queen! Not dark but beautiful and terrible as the Morn! Treacherous as the Seas! Stronger than the foundations of the Earth! All shall love me and despair!”

But then she sighs and turns her back on power and fame. Her whispering voice trembles.

“I have passed the test. I will diminish, and go into the West, and remain Galadriel.”

I found the river as I had never seen it before: the dam a mile downstream must have been opened, and the water level was low. A long land bridge stretched out into the deep, and I walked on its smooth stones. I sat down at the very end of it so that I could only see the water. It felt like I was sitting in the movement of time, watching the ages pass.

Later, I walked back towards the railroad tracks and found a small ring of stones and a few blackened logs. It gave me a strange feeling, in that quiet place, knowing that someone had spent the night there. Someone had a drink, probably on their own. For all I knew, they were still there, resting in the shadows, waiting for me to move on.

Last week I walked through the large hall at a conference held by the publisher of my latest book. I hovered around the sales area, hoping to be noticed, hoping someone would look up at me, begin to think very hard, and then, as complete and utter joy took over their countenance, they would recognize me, grab my arm, pull me over to their small circle of friends and gush about the wonderful book I had just written. Everyone would sheepishly pull a copy of the book from their bags, shrug their shoulders as if to say they could not help themselves, then ask me to sign their copy.

This never happened. Not even once.

If Frodo would have offered me the Ring of Power at this conference, I’m afraid to say I would probably have humbly accepted. I grew giddy at even the possibility of fame. I wanted to be important, recognized. Thankfully, there are no questing hobbits in Orlando offering rings of power.

In hindsight I smile with embarrassment and see myself for what I am: a small boy riding a loud tricycle on a wooden deck, making an endless amount of noise, crashing into anything that gets in my way, then looking up at my Father with a sheepish grin before riding on. As if that is all I have been created to do.

But when I listen, when I really listen, I realize my true purpose is not located within a hundred miles of the latest conference, the most popular speakers. When I listen, really listen, the same Father I’m too content to ride circles around beckons me to follow him down a much-neglected path. A path of silence. A path of hiddenness.

At the end of the path lies a river. I follow Him out to the end, and we sit there, watching the ages pass.