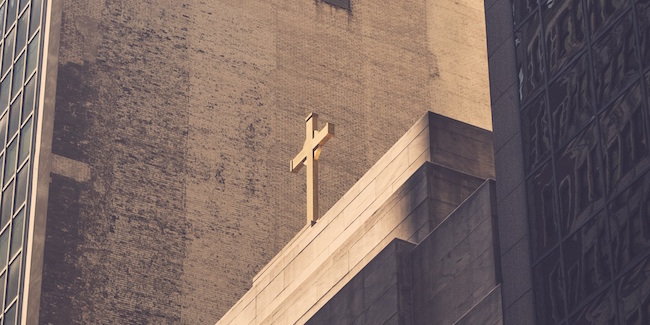 I’ve been a Christian since I was old enough to pass the communion wine, so sweet, and taste the salty crackers that were His body. My dad was a pastor for almost forty years. I know how churches work. I know what most of them are trying to do.

But I still don’t like being a visitor. I don’t like when strangers talk to me – I mostly want to be left alone. I don’t like the feeling that the stakes are suddenly very high for these people – I don’t like feeling as if they feel that any small thing they might do could determine whether or not I come back. It’s all rather strange.

So, to all you folks who are interested in spirituality or learning more about God but just can’t get into the idea of visiting a church: I get it. Church people can be strange.

But in spite of my hesitancy, I woke up on Sunday at my in-laws place in North Carolina and really wanted to go to church. The main reason being, it was the first Sunday of Advent, my favorite time of the year. We’ve been attending St. James Episcopal Church for about a year and a half, so we’ve been through the Liturgical calendar once, and some of my favorite services took place on the Sundays leading up to Christmas.

So I found the closest Episcopal Church, which happened to be All Saints in Gastonia, NC. Lucy said she’d come with me, bless her cotton socks, and the two of us headed out for an adventure. The front door wasn’t clearly marked, so we kind of wandered around outside the small building for a little while and Lucy held my hand until someone told us which way to go.

Someone met us at the door and shook my hand. Of course, in my nervousness I couldn’t speak very well.

Well, that was embarrassing.

The sanctuary was small, maybe ten pews on each side, and there were only a handful of people there when we arrived. It was a new experience for this northern guy, hearing the confession and the prayers and the scriptures read in that deep, southern drawl. It was good.

The first thing I noticed though, the first thing I was looking for, was the lone candle lit at the front of the church, the first candle of Advent. It was like everything else was still and waiting, but that candle? It was alive and moving and powerful. Strange, I know, that a tiny little candle would seem that way, but it did.

It’s been a little over a month since I met with Church World Service and asked if I could help them tell the stories of the refugees they are working with here in central Pennsylvania. It’s been three weeks since I met Miriam. Last week I spoke with Ahmed (and will tell you his story soon). I hope to keep meeting more refugees who have relocated here. I want to keep sharing their stories with you because it feels like such important work, especially in these days of fear and suspicion.

But sometimes the work feels so, so small. Do you ever feel that way? Do you ever wonder, What difference am I actually making? Instead of taking the time to meet all these new people, listening to their stories, and writing them down, wouldn’t it be easier to stay at home? Watch television. Hang out with my family. Anything really. I have plenty of other things to do.

Sometimes these beautiful things we are called to do seem so inconsequential.

How can this one small thing ever make a difference?

The service was comforting because it was mostly the same as our service back in Lancaster, and I realized that’s one of the nice things about the traditional churches: you kind of know what to expect. We prayed the same prayers as our friends back home. We said the same confession. We recited the same creed. We read the same scriptures. I imagined what Father David would have chosen to pull out of those passages. I imagined the stories Father Rob would have told.

Lucy and I sat there and she held my hand, my little daughter of light, and the singing was nice and the sermon was good but I couldn’t take my eyes off of that Advent wreath with its one, solitary candle burning. Such a small thing in such a wide world, that tiny candle.

And in that moment I felt an immense peace. The world does not hinge on my good works. Thank God. The world will not rise or fall based on the popularity of my blog posts, the perfection of my parenting, or the amount of things I manage to acquire. There is a much greater hope, a far greater anticipation. This is what the season of Advent has to offer us. This is the peace that comes in a quiet, expectant waiting.

If you’d like a few bonus blog posts every month plus information on upcoming books, you can sign up for my twice-monthly newsletter HERE.

9 Replies to “When Your Work Feels So, So Small”