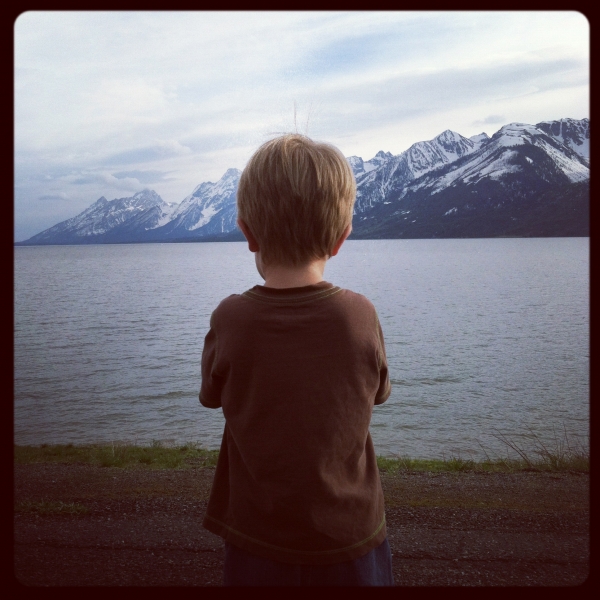 It was just over three years ago that my family and I took a four-month trip around the United States in a big, blue bus named Willie. We left in February, and it was in the early spring days of May that we arrived at the base of the Tetons and began the long, slow trek to the top. I’m not sure that I would recommend driving a 20,000-pound vehicle up a 10% grade on a winding, two-lane road.

That diesel engine chugged along so slowly that at some points it felt like we might start coasting backwards. My hands were white-knuckle grasping the wheel, not because of the speed at which we traveled, but precisely because of how SLOW our progress was. We followed hairpin turns and chugged along narrow stretches without guard rails, sections where we could look down on either side and see rubble and evergreens and wilderness.

The journey to the top of that mountain range was tedious and heart-burn inducing. It was much slower than we would have liked. The road up was perilous and beautiful.

But the view at the top was breathtaking.

(Yes, I know, we did lose our brakes on the way down, but let’s put that to the side for a moment.)

My point is this: you have a long, difficult road ahead.

I think it’s important to realize this and settle in for the long haul. Our culture has sort of arrived at this point where the prevalent message is IMMEDIATE SUCCESS and SHOOTING STAR and UNEXPECTED RISE TO THE TOP. Businesses should be immediately successful, musicians should be selling tens of thousands of albums tomorrow, writers should be on the best-seller list within a few months of the release of their first book.

The top is right there, within your grasp! WHAT IS TAKING YOU SO LONG?

When the trajectory of our rise is not as fast or as famous, it’s easy to get discouraged.

Don’t get discouraged. Keep plugging away. Keep your foot on the accelerator. Keep moving forward.

This morning Maile and I sat at the table at 4:45am drinking coffee and having a delicious, quiet morning before the kids descended. We don’t always wake up so early. I happened upon a list of the books I’ve written in the last six years, since the beginning of this crazy adventure of ours in which I decided to try to write for a living. There are nineteen books on that list, some traditionally published, some self-published, some not yet published.

That means I’ve written around a million words worth of books.

And you know what? I don’t have any best sellers to my name. I haven’t made millions of dollars. Very few people have ever heard of me and my writing. In fact, I only had my first serious conversation with a literary agent earlier this week. After six years of writing. After 1.5 million words.

Let’s keep going, you and I. Let’s keep our foot on the accelerator. Let’s not worry about the select few who shoot past us on their motorcycles, racing to the peak. The top will still be there when we arrive, whatever that might look like. It will still be there. I promise.

6 Replies to “The Long, Slow Road to the Top”