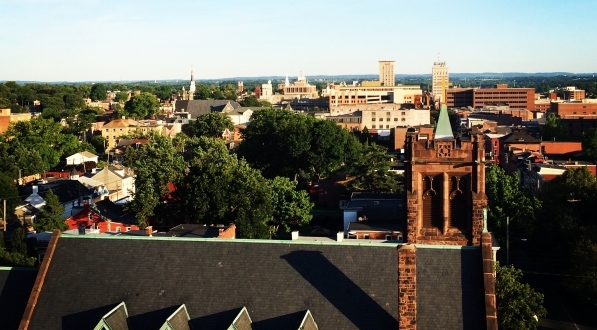 On Saturday night Maile turned the fan off in our bedroom, the fan that is usually on high speed and sounds like a helicopter preparing to lift off. It’s been a long time since we’ve slept without that fan on, and for the rest of the night I kept waking up to voices on James Street, people shouting back and forth, cars with loud exhausts and squealing tires.

There’s a lot that goes on in the city when most of us are sleeping, but it’s pretty easy to tune it out if you have decent windows and a loud fan.

I was a little nervous the first week I showed up to teach creative writing to ten 4th and 5th graders at one of the elementary schools here in the city. I didn’t know what to expect. Would they listen to me? Would they even be interested at all in writing?

Turns out they love to write. I’d give them an idea for something to work on and then, for the next twenty or thirty minutes, they’d write. The silence was glorious – I wonder if they could feel it, too, the way that silence works into your bloodstream, the way it gives life. Their pens scratched through the notebooks I gave them and at the end of the first week most of them wanted to take their notebooks home with them, so I said go for it, and the next week everyone remembered to bring them back, and they had more writing in them, more ideas.

Perhaps most importantly for me, I was reminded that a good story is nothing more than a character in a setting who faces conflict. To see this basic formula play out again and again in the writing of twelve year olds was fascinating.

Most of all, I learned that there’s a whole city, a whole world out there, waiting for us to turn off our fans and really listen. It’s easy enough to turn off our lights and sleep through life, caring only for the people inside our own four, warm walls. Are you tuning out the world? There are voices out there that need to be heard.

I walked down the street this morning, Sunday, and the sidewalks were mostly empty. Then I saw a kid coming towards me on the other side of Duke Street. It was one of the kids from my class. I shouted his name. He didn’t hear me. I shouted it again. He looked up. His eyes lit up and he waved. It was strange for both of us, seeing each other in a different setting, in real life, where our minds weren’t cloaked behind characters and conflict.

There are voices out there that need to be heard.