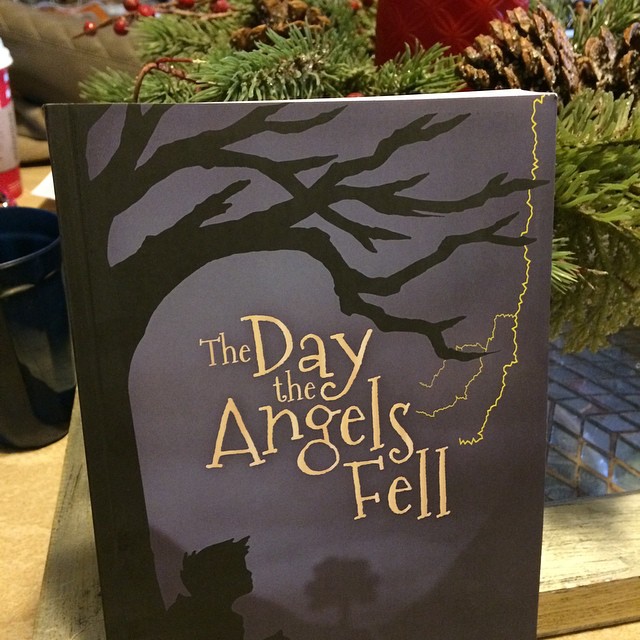 I spent over two hours in the post office on Friday mailing nearly 200 copies of The Day the Angels Fell to six different countries. At first the lady at the post office wasn’t too sure what to think of me, but by the end of it we were chatting amicably and when I found out she liked to read, I gave her a copy. You can always tell a reader by the way they receive the gift of a book.

Kickstarter was a great idea, wasn’t it? the first voice asked. I mean, now instead of making a fool of yourself in front of your family and friends, you’re doing it in front of a few hundred people!

Also, another voice chimes in, now that you’ve already started scheduling a book tour, that will work out perfectly once all those 1-star reviews start coming in. How fun will that be, touring with a book that everyone hates!

These guys don’t pull any punches. They know how to hit you where it hurts.

After listening to Anne Lamott the other week, I realized that one of the things I love most about her is that she’s reached a stage in life where she seems not to care what other people think about her, and she doesn’t try to control others. Wow. Those are two things I would love to be able to say.

I don’t care what other people think about me.

I refuse to try to control other people through judgment or manipulation.

I feel lighter, just thinking about living that way.

So as those yellow envelopes got barcoded and stamped and sent to Australia, Canada, Germany, the Netherlands, England, and the US, I decided that I was going to celebrate the moment. I sent out 200 books to people who wanted to read them! That’s pretty cool. On the way home I stopped at the Fractured Prune for a dozen Mocha Buzz donuts, and when I got home they were still warm and Maile, my kids and I had a little celebratory snack, both because I had escaped the purgatory that is the USPS on a Friday just before Christmas and also because The Day the Angels Fell is making its way into the world. I don’t think we celebrate our creative endeavors enough. I know I don’t.

For any of you who receive your copy this week, post a photo of you with the book on Instagram or Facebook and tag me (@shawnsmucker on Instagram or Shawn Smucker, Writer on Facebook), and you’ll be entered to win a free copy of the book. On Friday I’ll draw five winners and mail a copy to one person of your choosing (which could be you if you want a second copy).

Four days until the launch!

3 Replies to “Stop Listening To Those Voices. Create.”