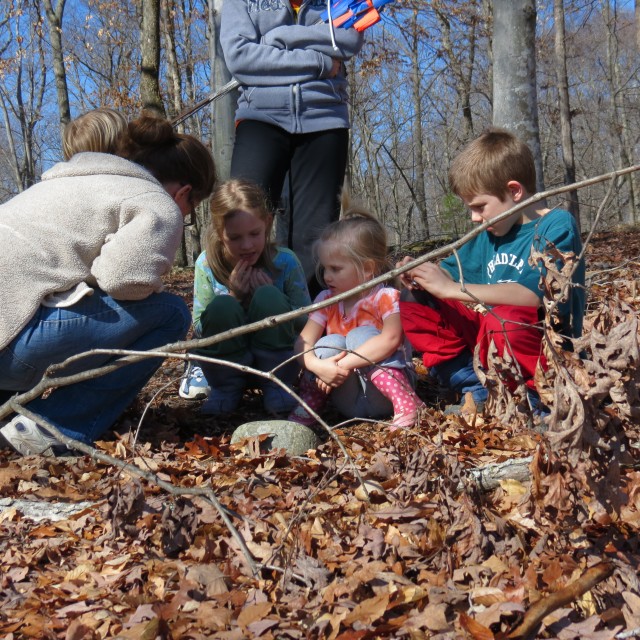 We walked through the woods to the large clearing. A barely discernible wall surrounded the area where the slaves had been buried. At the far corner, small flags stood perched at attention, fluorescent orange and blue, marking the gentle excavation already done.

It all felt, well, perhaps as haunted as any place I’ve ever been. But haunted isn’t exactly the word – inhabited? Unbearably heavy? Having been mostly forgotten but itself never forgetting? That’s the feeling the leaf-covered plot of space in the woods gave me.

“How old are you, Cade?” Andi, a friend from college and our tour guide of the estate, asked my oldest son.

“Hmmm,” she said. “At eight years old, a slave was expected to hoe in the fields from sunup to sundown.”

Cade’s eyes went wide. I stare at his frail, thin arms. I try not to imagine the sunburn that would have covered his narrow shoulders, the blisters bubbling out between his fingers during that first week of being eight years old.

“It would be your job to stay behind all day and watch the little children,” Andi said to her quietly. This said to Lucy, the lovely girl who spends most of her days reading, or imagining, or being what she is: a child.

Only a handful of gravestones still stand in that clearing, even though well over 100 slaves lived, worked, and died there. So we make our way methodically through one of the corners of the graveyard, poking thin metal rods into the soft earth, hoping to find stones that may have fallen over and been covered with dirt and debris during the intervening 150 years.

Thunk. My metal rod taps against something. I move it three inches to the side. Thunk. Again. Thunk. I call Andi over. We dig carefully with our hands, pulling away the dirt, ripping out the roots of weeds and grass. 150 years of debris. And there it is.

The edge of what looks like a quartz rock.

“Quartz isn’t native to this area,” Andi says. “This is probably the edge of a headstone.”

We mark the area with a colorful blue flag. Later, on a drier day, Andi will expose more of the stone, brush away the dust, exhume the past.

Later, when the sun has set and our stomachs are full from dinner, we walk out and start a fire. The kids melt marshmallows and make s’mores. The adults mostly sit and talk, enjoy the warmth, smile at the children.

At one point I lean my head back and look up into that sky, immeasurable. Stars stare down at me, unmoving. It catches me unawares, the realization that the slaves buried in that graveyard looked up at the same sky, the same stars. Many of them bore their children in a dark night such as this. Many of them exhaled their last breath under these same constellations. The molecules that made up their bodies are here, all around me.

And to be honest, I don’t know what to do with that, because if I let my soul touch just the edge of that cold, mostly buried rock of injustice, my throat aches and constricts, and my eyes feel heavy and inhabited by too much emotion.

15 Replies to “Our Visit to a Slave Graveyard, and 150 Years of Debris”