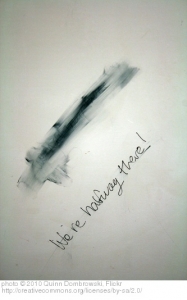 “No one will want to read that.”

“If your friends knew about the things you’ve done, they’d be super disappointed and probably leave you.”

When you’re alone in your car, or on the train, or encountering an unexpected moment of silence, where do the voices in your head take you? When life taps the pause button on your to-do’s and schedules and scurrying from here to there, like a squirrel suddenly confronting a predator in the midst of hoarding acorns for the winter, which voices are you believing?

The voice that says, “Remember how you failed before,” or the one saying, “You can do this”?

The one reminding you again and again that “You’re addicted, plain and simple,” or the encouraging voice beckoning you to believe that “This addiction points to something deeper, something I need to uncover”?

The voices you choose to pay attention to will determine the direction of your life.

The more I listen to other people’s stories, the more convinced I am that we cannot change a given behavior the same way we flip a switch or turn on a car. Habits deeply ingrained become the default setting for our lives, and in most situations no amount of resolving can overcome it.

But we can change the voices we are tuning in to.

Maybe you feel like there are no good voices left in your head. Maybe the good voices have been drowned out by the bad. This is the logical conclusion of spending a long period of time listening to the wrong people. This is why scripture can be so beautiful: it can present you with a new voice to listen to.

He renews my strength. He guides me along right paths, bringing honor to his name.

When doubts filled my mind, your comfort gave me renewed hope and cheer.

I love this passage from Henri Nouwen’s book, Bread For the Journey:

“Many voices ask for our attention. There is a voice that says, ‘Prove that you are a good person.’ Another voice says, ‘You’d better be ashamed of yourself.’ There also is a voice that says, ‘Nobody really cares about you,’ and one that says, ‘Be sure to become successful, popular, and powerful.’ But underneath all these often very noisy voices is a still, small voice that says, ‘You are my Beloved, my favor rests on you’…To hear that voice, however, requires special effort; it requires solitude, silence, and a strong determination to listen.”

“That’s what prayer is.” – Henri Nouwen

Whether or not you are a religious person, maybe it’s time to pray again. Maybe it’s time to make a special effort to find solitude, silence, and then enter into that with a strong determination to listen to the right voices.

So what if you already screwed up on your New Year’s Resolutions! Start listening to the right voices, pick yourself up, and try again.

Similar posts include:
Why Having a Terrible Memory Can Be a Really Good Thing
My 56 New Year’s Resolutions

3 Replies to “Fourteen-Day-Old-Already-Screwed-Up New Year’s Resolutions, and Listening to the Right Voices”