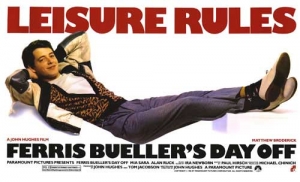 I don’t remember the first time I watched Ferris Bueller’s Day Off, but (as I’ve explained while pulling writing secrets from other 80s movies) I was only nine years old for most of 1986 and there’s no way my parents were going to let me watch a PG-13 rated movie at that point. But it is one of those 80s classics, right up there with Breakfast Club and Can’t Buy Me Love.

Here are some of the secrets it has to teach us about writing:

The best writers soak up what’s going on around them at all times. Stories, characters, details, metaphors: they are everywhere. Get into the habit of taking notes about little things you notice: character traits, the way certain things taste or smell or feel. Pay attention.

Ferris: If you’re not over here in fifteen minutes, you can find a new best friend.
Cameron: You’ve been saying that since the fifth grade.

When I say, “follow through,” what comes to mind is the word “deliver.” Don’t promise something and then not deliver it to your reader. Don’t give your blog post or your book or your short story a flashy or controversial title unless you can deliver on it. Don’t introduce a fascinating premise if you’re not going to work hard enough to truly explore it.

Now, I’ll admit, I don’t hold to this at all times. Occasionally I like to simply write and see where it takes me. But at some point a plan will emerge. It doesn’t have to be in outline form. It doesn’t have to be in a list of plot points. But if you have absolutely no idea where you’re going, and you’ve been traveling for some time, you might want to pull over on to the shoulder and get the GPS out.

4) Only kill off characters if their death will serve a purpose. Otherwise, it just looks like you got tired of their presence in your story.

Cameron: [Whispering to himself after hanging up from a phone call with Ferris] I’m dying.
[Phone rings, and Cameron answers]
Ferris: (over the phone) You’re not dying, you just can’t think of anything good to do.

5) Readers want to be able to trust the narrator.

Ed Rooney: I don’t trust this kid any further than I can throw him.

The narrator must be trustworthy! Even if it means the narrator can be trusted to be untrustworthy. If you know what I mean.

5 Replies to “Five Writing Secrets Found in the Movie, “Ferris Bueller’s Day Off””