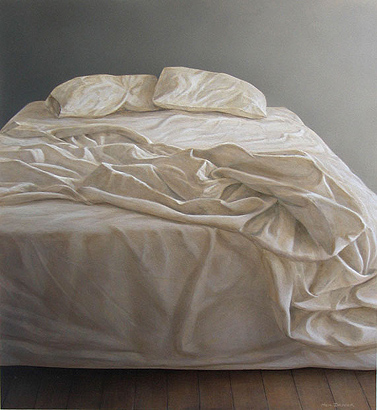 She sat there, in bed, looking around at the others. She tried to act normal, tried to disguise the panic slowly rising. Nothing out of the ordinary had happened to them that morning – they went about their routines. They stretched and eventually stood up, grabbed a bite to eat, took their time getting a drink, then finally walked outside.

Yet she still sat there, completely still. Scared to move because of what had happened earlier that morning.

It had been a swelling, a strange sort of massive movement that took place under her. She could still feel it. She raised her head and glanced over to where the others had slept, checking to see if they had left anything behind. There was nothing – except the small hollows left on their beds from where their warm bodies had passed the night.

She took a deep breath and stood up. At first she ignored her sleeping spot.

Nothing happened, she told herself. Nothing’s there.

She ate a little. She drank some water. But then she couldn’t resist any longer – she had to find out what had happened to her in the night, what had come out of her.

She turned her eyes toward her bed.

Dear God, what is that? Where did it come from?

She scrambled out the door, hoping that the others would forget who had been sleeping in that spot. She didn’t want to be identified with it.

Yet she felt an odd connection.

So, what’s this story about? (I’ll confirm the correct answer tomorrow).

11 Replies to “Can You Solve Today’s Story Riddle?”