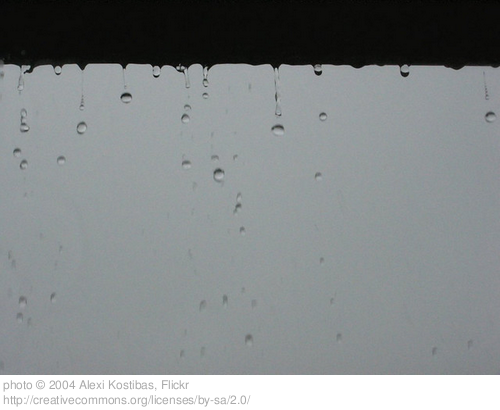 A little girl skips through the light rain, her brown curls clinging to her forehead. She has a lollipop in her mouth and a miniature American flag in her hand. She splashes from puddle to puddle, the soles of her shoes slapping against the wet ground. Her mouth moves in small flutters, and because I have a girl her age I know she is probably telling herself stories, or singing.

An old couple walks through the rain, clutching an umbrella between them as if letting go would mean losing each other forever. They move at a painfully slow pace, and I cannot imagine the hundreds of hours it will take them to make their way around the fairgrounds. But they don’t seem to mind.

The rain comes down harder, and everyone without an umbrella ducks under the closest tent they can find. The drops make a raspy sound on the roof, like a rattlesnake that won’t quit. Drips fall heavy from the canvas edges, form small streams that sneak their way through the grounds and reflect the lights, the gray sky.

Being at the fair on a rainy day feels very much like being at school on a snowy day when school hasn’t been canceled. You wonder how much work will need to be done, whether or not everyone will show up, and when the sun will ease the world back into its routine.

Pete the Trash Man drives his way around the rows, undeterred by a little rain. He wears a tan baseball cap and a yellow slicker. He hoists wet bags of trash into the back of his cart where they explode in a shower of crystals. He will make the rounds for the next twelve hours. I wonder what his 78-year-old mind thinks about, cruising these empty rows on a rainy day.

4 Replies to “Frederick Fair, Day Seven: The Inevitability of Rain”