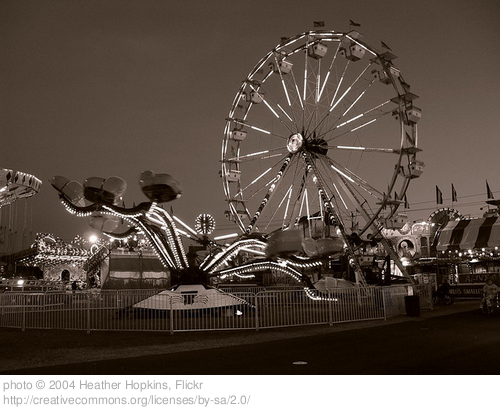 The eight-year-old boy scans the horizon. His mom says they are close. He rubs the sleep from his eyes with small fists and yawns, pleasure swelling at the thought that it is Friday, and they are almost at the fair. He leans his face against the car window, his breath glazing the glass.

Then he sees it, rising up beyond the small town like the north star, or the silos that used to help him find his way home: a ferris wheel.

Inside the fairgrounds, the eight-year-old boy runs ahead of his parents, ducks back the secret passageway between a row of campers, and sneaks into the back of his grandfather’s tent. The smell of funnel cake and caramel apples and popcorn chase him, friendly ghosts.

“Hey!” he shouts, and it seems like everyone erupts with joyful shouts, as if they haven’t seen each other in years. His dad is there, running ham and cheese over a big slicer (one year, when the boy is older, his aunt nearly cuts her finger off on the spinning blade). He hugs his dad and slides down the narrow aisles strewn with extension cords and empty cardboard boxes.

“Hey, grandpa!” he says, and his grandpa looks at him, pretends not to recognize him.

“Who’s this?” he asks in a gruff voice, his jowls growling, his eyes glittering.

“Oh, it’s you,” he says with a smile. He looks around, trying to be sneaky, then he holds out his hand. The boy plays along, reaching. His grandfather hands him a $10 bill. He might as well have given him a million dollars.

There is a large spinning wheel. It costs one dollar to play. If you win, you get a bag of Snickers. The boy wins a lot – suspiciously so. The carnival worker must be stopping the wheel on the winner’s spot with his foot. The boy walks back to his grandfather’s tent, loaded down with bags and bags of candy bars. He doles them out to his cousins, newly-minted million dollar bills.

Country music blares from the old speakers. The boy crawls under one of the tables, he piles up three or four broken down cardboard boxes and spreads a sleeping bag there, in the dark corner. He crawls inside, tasting its warmth, his belly full of treats. He can hear his family working around him, shouting out orders, laughing with their customers.

The cool autumn air has turned chilly – it blows in under the table, and he gives in to sleep, dreaming of tilt-a-whirls and cotton candy and the day when he’ll be old enough to work in that tent for his grandpa.

One Reply to “Frederick Fair, Day 6: Another Time Machine”