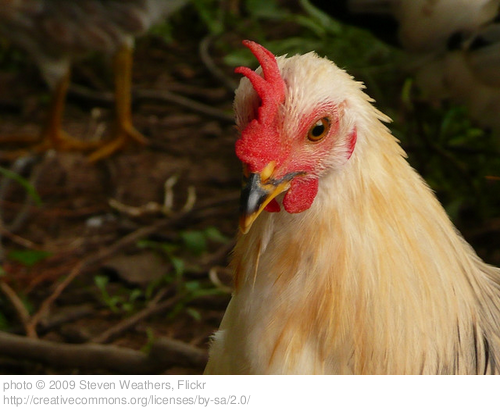 Last week I did something I never thought I’d do: with some help from our Amish friend Rebecca, I butchered five of our chickens. The whole time I was thinking about ways that butchering chickens is like writing – sounds strange, I know. Here are a few of them:

I looked at dad with this “what do we do now?” kind of look.

Now, I don’t know if that’s a real word or not, but anyone standing where I was standing (straddling a 4×4 inch beam with two nails in it, holding a squawking chicken in the rain) would have known exactly what he meant. I grabbed the feet, and we got started.

There’s no better way to start a writing project than by starting it. Research has its place; character sketches are helpful; for some folks outlining is a must. But whatever you do, don’t wait to start until you feel ready. The only way to get started is to get started.

ONCE YOU BEGIN YOU HAVE TO KEEP GOING. DON’T STOP. FIND A RHYTHM THAT WORKS FOR YOUR LIFE AND STICK WITH IT.

“Let’s go, let’s go,” Dad shouted. “Next!” He wanted the next chicken right away – not because he was enjoying the bloodbath, but precisely because he was not enjoying it. The faster we moved, the sooner it was over.

During any large writing projects that I’ve done, I’ve always reached a place where I get project fatigue. I want to stop. I tell myself I need a break, that there are other projects I should be working on: better ideas, fresher thoughts.

Most of us have been in relationships where people want to “take a break.” We know that is code for “end it all.” You need to start realizing that when your manuscript is saying, “take a break,” it’s trying to tempt you to give up. Don’t stop.

I’ll be honest – I’m on the lookout for a good writing mentor. Fortunately, my wife is (brutally) honest when she reads my work, and her feedback is usually spot on. But I wouldn’t mind having a seasoned fiction writer with whom I could discuss ideas and approaches. Some of this I get from reading various writing books, but I don’t think there’s a substitute for someone in the flesh who can stand beside you (or at least email you) and walk you through the process.

Giving something a name is a big deal. My kids knew instinctively not to name the chickens we called boilers because we told them the plan – those are going to be eaten. Somehow they knew that when you name something, a certain power or importance is released.

You’ve got to name things in your writing – don’t be afraid to identify addictions or weaknesses or ugly truths about yourself or your characters. These things are important; this process of naming is exactly what readers are expecting the writer to do. This is why people read – they want the nameless to be named.

TELL THE TRUTH IN THE RIGHT WAY

When I came back with five chickens packed in various coolers, my youngest daughter Abra (3 years old) came up to me.

“Daddy, where are the chickens?” she asked.

I told her the truth.

“They’re not coming back,” I said.

But not telling the truth in this situation would have meant stringing her along. Readers, like children, don’t want to be strung along. They want to know the truth about life, about your characters, and how you reveal this to them is immensely important.

What are some lessons you’ve recently learned about writing, either from butchering chickens or some other random activity?

13 Replies to “Five Writing Lessons I Learned From Butchering Chickens”