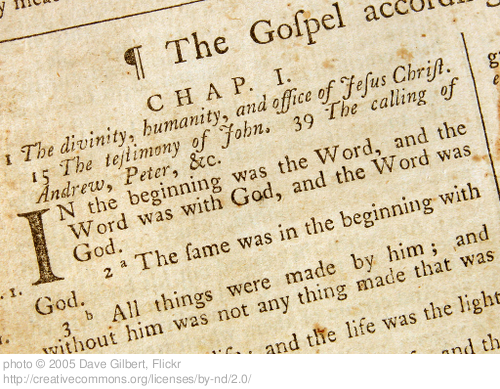 As usual, just about every single one of your sentences could lead us on a long rabbit trail of enjoyable discussion. Here are a few things that jumped out at me:

For example, I have seen many of the Biblical truths that I was taught as a child come to pass: “Give and you will receive,” “A soft answer turns away wrath,” and “The love of money is the root of all kinds of evil.” I personally do not believe the Bible is the word of God only because the Bible says so – I couldn’t even tell you where in the Bible it says that. I believe the Bible is the word of God because I have seen the truths it talks about reflected in the world that I know, the experiences that I have had. The Gospel message turns up everywhere, inadvertently, and that resonates with me.

Yet, as you rightly mention, many churches still try to tell people the Bible is the Word of God because it says so, an approach that doesn’t work with our generation. I would much rather hear the experiential side of Biblical truth. I think this goes along with something else you said: “In my everyday life, I do not experience beliefs but actual lived experience.” I am much quicker to accept someone else’s experience as being true than I am to blindly accept their beliefs. Perhaps the church would be better served in conveying experiences that line up with Biblical truths, as opposed to the approach of “The Bible says so.”

I love the last paragraph you wrote – it’s my favorite part of that email. “From what we know about the way Jesus responded to this in the Bible, he would come back at these people (who search for validation of their beliefs) with questions that smash through the knowingness of their beliefs.” Ben Emerson commented, “It seems like the people who went to Jesus and had a belief confirmed were few and far between. Jesus simply will not let you confine him.”

You then went on to say that, “This is why I don’t identify with Christianity as an organized religion.” This is why many people do not like Christianity as a religion – it has strayed from its original purpose, transformed from what it was to what it is, which is a catalogue of beliefs and moral values.

What was Christianity? What did it start as?

It started as a community. Put aside the miracles and the testimonies – the community aspect is what set it apart. The love they had for one another is what drew people to them, and then to Christ.

It is what drew me to Christ.

I grew up in a Pentecostal evangelical church, very charismatic, but I loved it, and as a natural outpouring of that, I grew to love Christ. Why? Because I had wonderful friends there, and I met caring adults who wanted to help me grow and learn. I saw the close friends my parents had, and I was drawn to the love they had for each other.

Something Christians and Christianity should never get away from is that they were, in the beginning, primarily about community.

Perhaps this is why you and I often find church and Christianity difficult. I can’t speak for you, but I am a bit of a loner, a bit of a homebody. I am not community oriented.

I’d be interested to hear more about your take on that next week – how do you, as someone not currently in Christian community, view this aspect of Christianity (ie the communal aspect)? Is this trait found in the other major world religions? Do you think that a church, now 2000 years on and splintered into thousands of denominations, can ever regain the sense of community once enjoyed by the early church? Is a community of believers even important in this day and age?