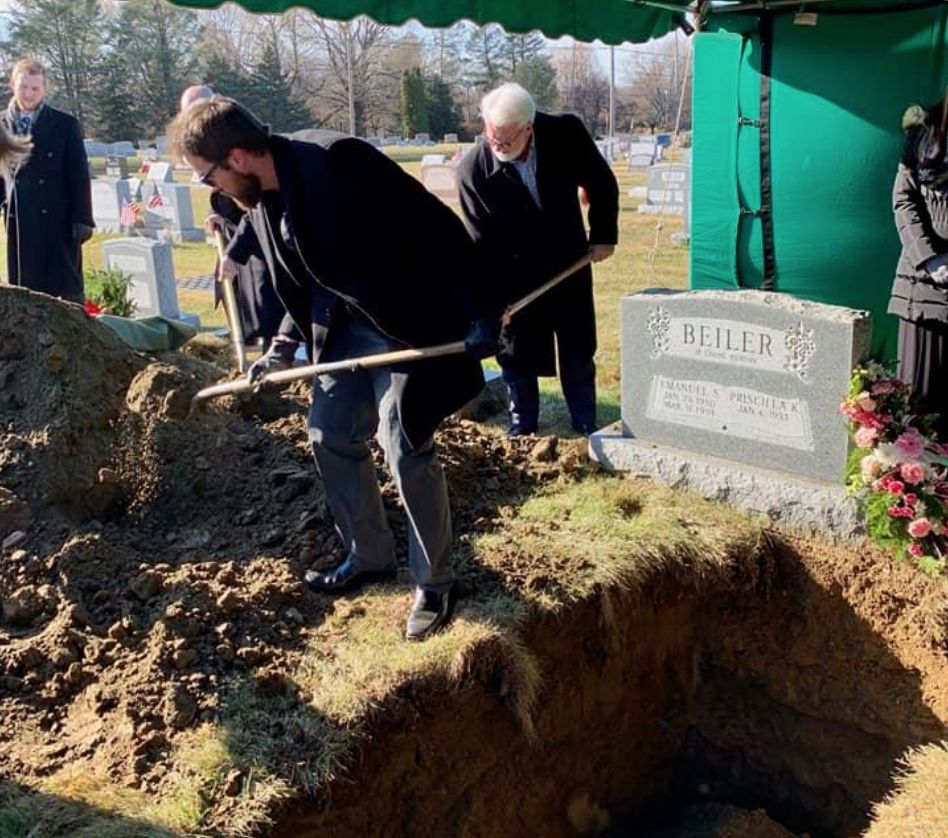 Five cousins and I bore the weight of my grandmother’s body, trying to keep our footing as we meandered the short distance from the hearse to the gaping hole in the cemetery ground. Like death and grief, carrying her was heavier and more awkward than I had expected. In the movies, the pallbearers maintain a certain appearance of stoic removal, gliding right along, but there in that small countryside graveyard, I found myself stumbling, breathing hard, trying to find my footing, especially when we got to the grave and had to skirt the sides of the hole, holding the coffin out in front of us. It was a relief, setting her down on the boards and straps that we would soon use to lower her into the ground.

There is something very tangible about death when you feel the weight of it. It’s one thing to view from the distance: the closed coffin, the shiny hearse, the green grass of the cemetery. It’s another thing entirely to wobble under the burden of it, to grip it with your own two hands, to carry your own grandmother to her final resting place.

Weeks before my grandmother died, we sat with her at my parents’ house, asking her about her life. As was usual, she answered our questions quietly and to the point. From where I sat, she looked as she always had: pretty, healthy, happy. But on the other side of her face, the side I couldn’t see from where I sat, a tumor grew. It had spread over most of the side of her head, along her ear, stuck out a few inches at her temple, and crept down her jaw, making it difficult for her to chew.

Even though that side of my grandmother’s face looked disfigured, my mom would often touch it, run her fingers along it. There is a kind of intimacy in that touching, a kind of love almost foreign to our world. What unfathomable grace, to stroke the black cancer where it breaks through the skin, to remember that beneath it is the one who bore you.

When we left my parents’ house that day I walked over to where my grandmother sat and kissed her forehead, told her to enjoy Florida. She would head south in a few days to Sarasota, where she always spent the winter. I had a feeling it would be the last time I saw her. It was a strange sadness.

My son Leo served as comic relief at the funeral. When a long, drawn out line of people walked from the church to the cemetery across the street, he remarked in a loud voice, “It’s kind of like a parade without all the fun stuff.”

My family has Amish roots, and the Amish have long-held traditions when it comes to funerals and burials. The grave is hand dug, the coffin is lowered manually into the ground using straps, and the hole is filled in by the deceased’s loved ones. My family wanted to maintain some of those traditions.

The six of us cousins gripped the straps and eased my grandmother’s coffin into the ground. After it was situated in the plastic container at the bottom of the grave, we lowered a second lid on top of it. Then, I took a shovel from the ground. I bit into the dirt with it, picked up a few clods of earth. But just before I dropped it in, I glanced over at the row of my grandmother’s children–my mom, my two uncles, my aunt. I felt a kind of remorse for what I was about to do.

I tilted the shovel and the clods of dirt fell onto the container surrounding my grandmother’s coffin. The sound of the dirt was hard and stark in the graveside silence. My cousins followed suit. It was a quiet, sunny day, and it felt oddly comforting, the work of digging, of filling. The cold gripped us, and a gentle breeze swept through the stones, out into the cornfield. Wispy white clouds drifted over the countryside, this place where my grandmother had been born, where my ancestors have lived for 250 years. Thirteen generations living on this dirt.

And in all of that space, all of those years, all of that silence, the only sound was that very dirt thudding onto my grandmother’s coffin. The sound muffled as the hole filled.

Leo walked over very close to the grave, watched as the dirt begin to fill up the hole. When he spoke, it was in a wistful voice full of genuine longing.

“I wish I could lay down there with grandma and go to heaven,” he said, looking up at me with big brown eyes.

I ran my hand through his hair, pushed it out of his eyes, and leaned my forehead onto Maile’s shoulder. And I wept.

9 Replies to “The Sound of Dirt”