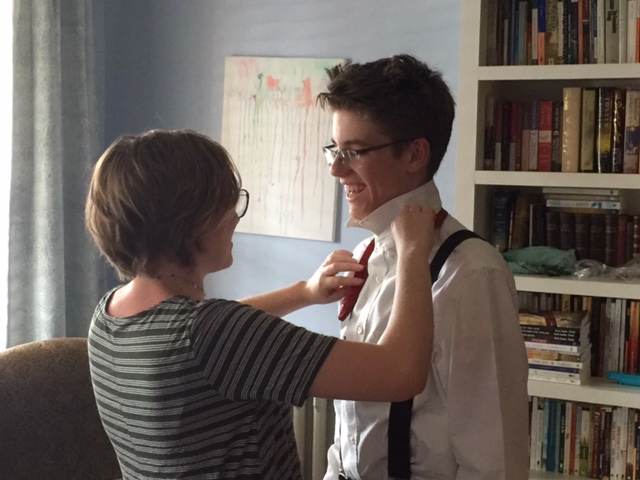 Though he couldn’t possibly remember it, this first son of ours who turns 16 this week was born in a kind of faerie land, on a property called Rocketer.  It was a warm June morning in Wendover, England, and his mother paced the tiny kitchen while I timed her contractions. The cottage was at the bottom of the hill on a large, 100-acre estate, made up of mostly trees, and our hedge-lined garden welcomed Maile as she took her laboring outside. At the top of the hill was a path worn three feet deep in the earth, a path taken by pilgrims for hundreds of years on their way to Canterbury. Or so the legend went.

But on that day in June, 2003, Maile made many laps around the garden, breathing methodically, pausing when the contractions came down. The sheep, with their mid-summer lambs, looked on, chewing the grass, bleating, wandering along the fence row. We were young in 2003. I was 26. Maile was 24. We were babies.

We could never have imagined who that about-to-be-born-boy would become. Some things are outside the realm of our imagination.

Eventually, we drove our Mini along narrow, English roads to the hospital ten minutes away. Maile’s mom braided her hair from the back seat. Maile’s breathing was intense but in control. When we arrived, the midwife examined her, smiled gently, and said she wasn’t dilated yet, that we should come back later, when the contractions were closer together.

How often I think I’m ready for the next phase! Ready to bring into existence something new! Bring it! I’m good to go! I’ve got everything figured out! And then God taps me on the head and smiles gently and says, in the kindest way possible, “Keep doing what you were doing, son. Keep breathing. Keep laboring. It’s not quite time yet.”

A few hours later, the trip to the hospital looked a little bit different. Maile’s feet were braced on the dashboard, and she shout-moaned through each contraction. She could barely walk when we got out of the car. She labored hard and long and, finally, late that night, after shifting over onto her side, our first son came into the world.

So small that he fit easily into my arms. I was terrified. A son? How was I supposed to raise a son? I had grown up with all sisters.

Now he is inches taller than me, broader in the shoulder, looking for a job. He has read almost all of my favorite books, and they are his favorites. Now he walks a mile through the city to school during the year and navigates issues I never even had to think about. He is finding his own way. Soon, too soon, he will leave us.

We will tell him not to look back.

While I was writing Light from Distant Stars, this book that’s coming out July 16th, I kept a daily journal that I would write in prior to working on the novel. In it, I talked about the difficulties I was facing as a writer, what I was trying to write, and just sort of my general process. If you preorder the novel now (preordering a book is one of the most helpful things you can do for a writer), I’ll email you the 51-page journal. Find out how to get it HERE.