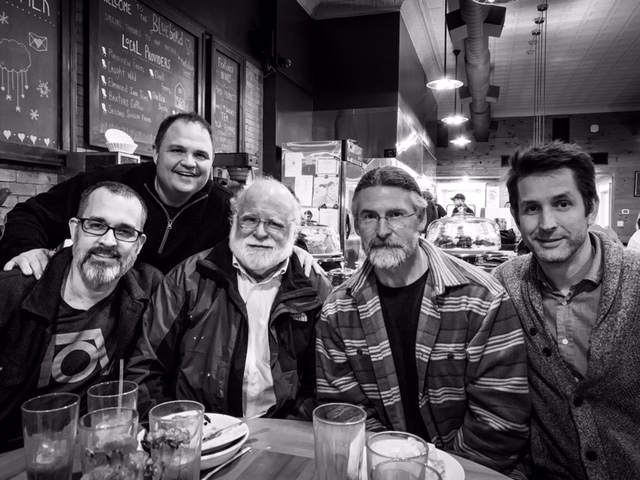 We sat on sofas and on the floor. We tried to catch up on each other’s lives in a few short days. We ate and we laughed and listened. Some of their written words read out loud made me cry.

There were late nights over hot tea and a game that had us shouting and laughing all over again. There was a wood fire in the fireplace. There were quiet walks on an empty street.

There was this sense that, while I write alone, I am not alone. This realization felt like bread and wine.

We hugged outside the restaurant, knowing another long year awaited. But it felt like it might be okay.

Maile and I drove away early, heading towards our home, 500 miles away. The snow came down, and the roads were covered. We advanced slowly, followed the tracks of the car in front of us. The world was coated in white, and the road felt tenuous, unpredictable, like it might tire of us at any moment and toss us aside.

We passed four accidents within a mile of each other, cars spun off onto the shoulder. Hoods smashed in. They faced the wrong direction, as if lost. One car was burnt to a crisp.

At dusk, as we passed the exit that went to the college where we had met, Maile pointed.

“Five deer,” she said, awe in her voice, and a bit of sadness, “standing at the edge of the wood, in the blowing snow.”

We picked up the kids at my parents’ house, loaded their belongings in the back of the truck, the snow settling on us like a light blessing. We drove slowly home, unloaded, and entered the house. It was a whirlwind of children and suitcases, snow clothes and snacks, wet floors and the repeated command that turned to a plea, “Go to bed!” The radiators were already hot. Out front, James Street was quiet, covered in a layer of snow. 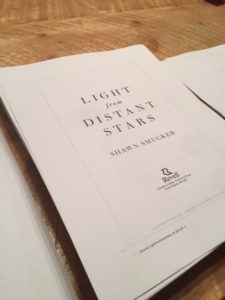 In the mail that had been waiting for us, I saw a manila envelope, and I tore it open. Inside, the designed pages for my new novel, Light from Distant Stars. There it was: the title page, the dedication, the first line.

“Cohen Marah clears his throat quietly, more out of discomfort than the presence of any particular thing that needs clearing, and attempts to step over the body for a second time.”

As Maile had said as we drove slowly along the snow-filled highway, “Well, this is a weekend we won’t soon forget.”

To find out more about Light from Distant Stars, or to find links to preorder (and basically make me the happiest person on the planet), click HERE.