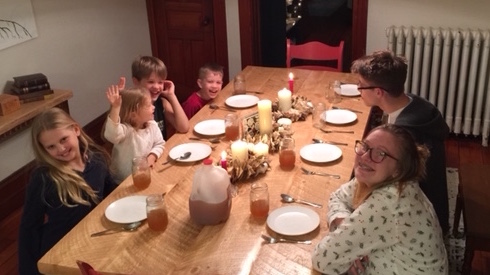 I went down into the basement this week to return something, a wrench or a hammer or some other tool that’s been floating around the upstairs like a loitering teenager. I navigated the rickety basement stairs and walked into the part of the basement we’ve managed to fix up into something that resembles a living room. That’s when I saw it.

It was an old printer paper box, it’s bottom cut out, somehow fastened to the stone wall–a homemade basketball net that Sam and Cade had made. I had heard them earlier that day, shouting and laughing and talking trash to each other. Protests of “foul” and “what a shot” and “nooooo!”

And it was strange, seeing it there, because it put me in a time machine, back to when I was 11 or 12 and playing basketball in my basement bedroom with a tennis ball and a plastic, one-gallon ice cream container, the bottom cut out. It was that cheap ice cream, but I didn’t know any better back then. I loved it.

30 years later, another hoop. Time is a circle.

Our oldest daughter went to Florida for a week with my parents to visit her cousins and her aunts and uncle and great-grandmother. Her leaving sparked an unexpected bout of emotion, as Maile and I navigated what our life will look like in not too many years. These children of ours, who we’ve fed and watered and clothed and nudged along life’s path, are not all that far from jumping out of the nest. Visions of baby birds plummeting through the air, spreading their shaky wings, gathering air under them, and coasting to a hopefully safe landing on a faraway beach come to mind.

With Lucy gone, there was one fewer place to set at the dining room table each night. One less opinion on various things. One less voice up late with Cade and me, after the younger kids are in bed. Even though it was only one less person, it felt like we were missing more than that. It felt like we were missing a vital part, one we couldn’t go on for much longer without.

I thought of my friends who recently lost children, some to accidents, some to cancer, some to suicide. I don’t know how to even imagine making my way along that kind of path. I guess that space would never be filled.

I waited up on the night my parents were driving back with her from Florida. I suppose I could have gone to bed and woke up when they called to let me know they were on our street, but to be honest, I couldn’t sleep. She was on her way home. I couldn’t wait to see her. When they got here, just after midnight, I walked out onto James Street in my socks, out into the freezing cold weather, and I hugged her and helped her carry her things.

We are all here again, under one roof. For now. The days keep passing. In another minute, or another thirty years, one of my kids will walk down into the basement of their own home and find a tentative basketball net stuck to a wall. This is how time passes. This is how one day melts into the next.

3 Replies to “What I Found in the Basement (or, how 30 years passed in a moment)”