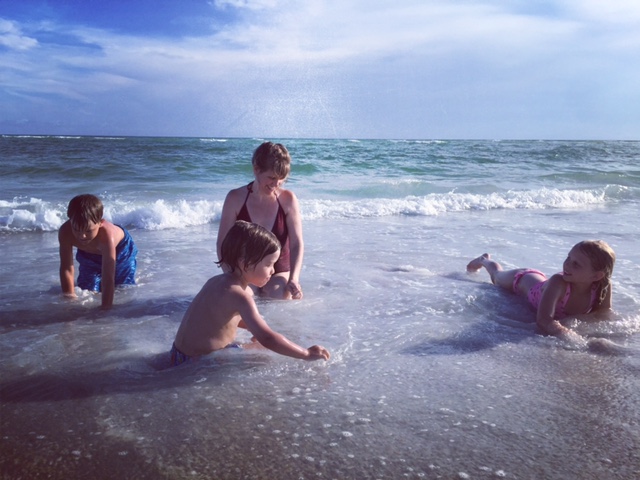 We are in Florida. I work on a few writing projects during the day, including my current manuscript, and Maile tries to find something to do with the kids when the sun is at its burning hot zenith, something that doesn’t involve going outside. The days pass quietly this way, and the afternoon thunderstorms drift along the Florida horizon, giants lumbering from here to there. I watch them through the glass, through waves of heat that rise up off the streets.

Evenings are best because we drift out to the gulf when the sun is dropping and the beach is empty. We swim out to the sandbar at Lido and stand in the shin-deep water 500 feet from shore, and it looks like we are nearly walking on water, not quite Peter, not quite able to stay on the surface, but having at least a shin-deep faith.

As the sun reaches down to the horizon, we build sand castles a dozen feet out of the waves’ reach, dig a deep moat and mound high walls and form keeps and towers, and we imagine we live there, in the sand, in that pretend place, far from the troubles of this world. Lucy and Cade and Abra and Sam join me on my knees, gritty in the sand, digging and building and dreaming. Leo and Poppy run in and out of the water, simultaneously brave and afraid. Maile is on her knees, bent over and staring at the sand, watching the tiny shellfish burrow their way to safety.

The waves keep coming, though. Higher. Closer. Their progress is subtle but they soon fill the moat around our castle, erode the base of the walls. The sun sets and we pack our things and rinse off in the dark, tasting salt on our lips, the grit never quite leaving us. The few people we do pass in the evening smile at almost-2-year-old Poppy and say hello, and she replies with her tiny voice. We drive back to my grandmother’s house with the windows open, the night air somehow both cool and warm, the lights of downtown Sarasota shining like stars.

And late at night, when the fans are whirring and the children are sleeping and we slip into the darkness, I wonder, Why do we keep building our castles in the sand?

Writing books feels a lot like building castles in the sand. After all, our sand castles never survive the night. The same could be said of most books. So much work, so much diligence, so much intention and discipline…for what? To be forgotten by most people soon after they come out. How many books are remembered and appreciated widely five years later? Ten years later? This work, this writing, can feel fleeting indeed, when the pouring out of your soul results in a tiny blip of interest, a small lump of words that stand until later books, later interests, later fads, push it out of memory.

But this is why I keep writing:

It is never about the sand castle. It never has been. I just didn’t realize it.

It is about doing the work diligently, enjoying it, creating something. It is about digging my hands into the earth and piling up what I find, forming it into something whimsical or beautiful, something that people walking by can enjoy. It is about getting lost in the creation of a thing so far beyond me, so far inside of me, that I never know what the end will look like.

Will you help me build the sand castle I’m currently working on? The odds it survives for long are not great. We might come back tomorrow and find it’s been washed away. But it has been a joy to build, and you can help me finish it well, if you’re willing to get down in the sand, to get your knees a little gritty, to get wet.

Here are a few things you can do to help:

Preorder my upcoming book, The Edge of Over There or request it from your local library.

There is still time to join my Facebook launch team. You’ll get a free digital ARC of the book in exchange for an online review and help spreading the word during release week, which begins July 3rd.

If you haven’t yet read it, buy the first book in the series, The Day the Angels Fell. Or request it from your local library.

I watched my children while we built our castles. I watched them as the waves came close. And I noticed something: they never thought the castle would last forever. They weren’t in the business of building something that would never fade, and this didn’t bother them! They watched the incoming waves test our moat and walls. They watched the water spill inside. As we left, the castle’s destruction was well underway, but they were never disheartened. Why?

Because it was fun to build. And they knew we would come back the next day to create something new.

Thanks for helping me build these little sand castles. It’s been fun, hasn’t it?