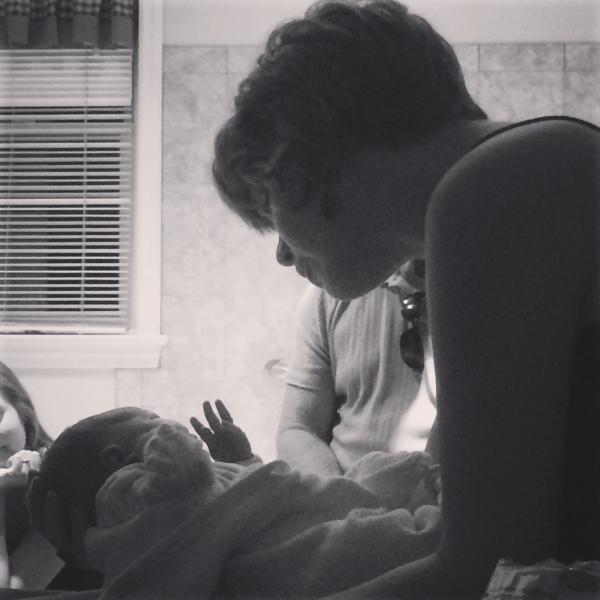 After last weeks post about us confronting a neighbor who hit her little girl, we’ve had a lot of feedback, all over the map. Maile and I have continued to talk about it, and I asked her to please write something for my blog because 1) I’ll do just about anything to convince her to share her writing voice with the world and, 2) I think she has some really good things to say about what happened. Here is what she would like to offer to the conversation.

I’ve made it a practice of mine not to get too involved with my husband’s blog. It’s his thing, not mine. I love reading his posts, hearing his perspective on this wild and wooly life of ours, but his blog and his community here is just that: his. But when he posted last week about our recent volatile exchange with the neighbor, myself co-starring in that low-budget drama, I felt the need to respond.

I actually hadn’t seen the blog post until my brother texted me, saying that he read it and how proud he was of me for standing up for injustice, not remaining silent. Like any little sister who wants to impress her older brother (despite the fact that we are now well into middle age) I was flattered by his words. But I immediately noticed an unsettling deep in my belly, an unsettling that I recognized as the same churning I felt the week before when I saw my neighbor hitting her daughter.

I immediately put down my phone after texting my brother back and went on a hunt for my computer, not a small feat in a house with six children who are well trained in the art of laptop misplacement. I found it, got on Shawn’s blog, and read his recount of the event, tears in my eyes as I relived it through his words.

But when I came to the end, I didn’t want to read the comments. It still felt too fresh; I still hadn’t come to terms with how it all played out. I wanted to call Shawn and tell him to take the post down and delete all the comments. The truth is that I didn’t want people applauding me, but I didn’t want them criticizing me either. I had too many conflicting feeling of my own about it all, and I felt unable to shoulder the feelings of others.

Immediately after the blow up with my neighbor, I felt angry and ashamed and hypocritical. I couldn’t turn a blind eye to someone beating a small child in front of me. I shouldn’t have, and I’m glad I didn’t. A couple days later I shared the story of the incident with a friend, and she said something that gave me some comfort: she said perhaps that girl will remember that someone stood up for her once; that someone said that hitting her wasn’t okay. I hope so.

But while I definitely had compassion for the daughter, I neglected to show compassion for her mother. I don’t know what her life has been like up until now. Clearly, from the fact that her car was being towed and she was tearing down the sidewalk and apartment buildings with her screaming because of it, she wasn’t having a great day. And who was I to point a finger at her when someone could have easily pointed a finger at me during one of the many times I’ve lost it with one of my children; I am no perfect parent. So when the dust settled after the event, the overwhelming feeling that hung over me was failure.

A couple days later, I listened to a sermon by Richard Rohr where he talked about Christ as the Divine Mirror. Rohr’s lesson centered around the passage where Jesus speaks with the Samaritan woman at the well. In the course of their conversation, Jesus basically “holds a mirror” up to the woman, telling her the things about her life that he shouldn’t have known: her sleeping around, her current live-in boyfriend. But Jesus doesn’t say these things in an accusatory way. He simply holds up a mirror to her face for her to see her life as it really is. Rohr suggests that in this divine “holding up of the mirror” in our own lives, Christ’s love and grace will not produce guilt or shame, but it will fill us a feeling of great responsibility.

That phrase “great responsibility” perfectly verbalized the sense that filled me nearly to bursting after the interchange with my neighbor. I was keenly aware that there was a better way to have handled that situation than I did. My greatest regret in it all, or should I say, my greatest wish is that my interaction with her would have led to building a road, no matter how gravelly and pot-holed, that connected us, a road that would allow for exchanging our names and an occasional “hello”, perhaps a road that her daughter could cross to sit beside our children on a sunny spring afternoon to make pastel chalk pictures on the city sidewalks. Instead, my yelling at her without extending any form of compassion built up a wall, and, at this point, that feels nearly impossible to overcome.

Thankfully, I’ve finally come to the realization that God doesn’t see what happened as a failure, but I do clearly recognize the great responsibility He has placed in my heart. I hope I get another chance to do things differently, to write a different story for my neighbor and I.

For some good thoughts about how to intervene when you see someone treating a child improperly, check out this article. I know I wish I would have read it sooner. What about you? Have you ever witnessed an adult physically abusing a child in public? What did you do, if anything?

11 Replies to “Great Responsibility: Maile’s Thoughts on Intervening After Seeing a Mother Hit Her Little Girl”