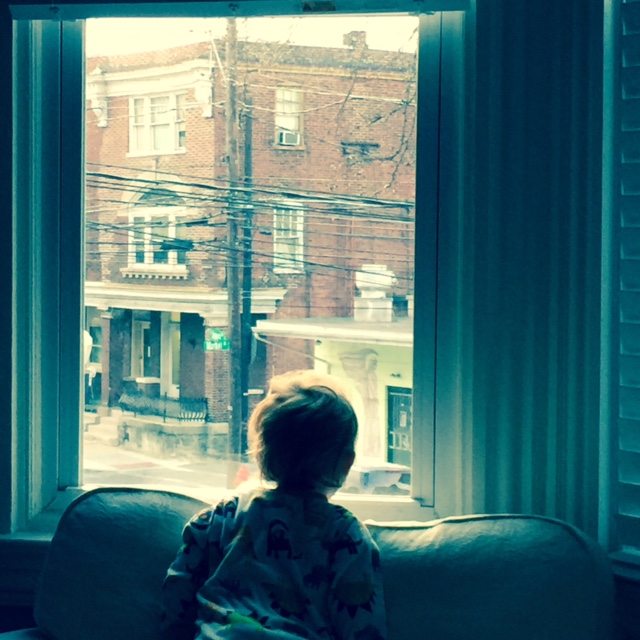 There was a small trailer in Springfield, Missouri, with garish furnishings, the golds and browns and reds of the late-70s clashing in an artificial sunrise, like Middle Eastern mosaics. Or maybe everything is that color in my memory because that’s the filter of those 70s photos, the golden hue clinging to everything. We lived there from 1977 to 1979, but I have three or four solid memories from those two years. It seems a paltry offering.

I took a photo of Leo the other day as he stared out our bedroom window onto James Street. I was his age when we lived in that trailer in Springfield. It’s hard to believe I was once that little child, looking out into the big, wide world.

There was a door at the back of the trailer that led out into a space without steps, just a long drop to the yard. It was as deep as the cavernous abyss that Gandalf stands over and says, “You shall not pass!” That back door led into nothingness.

In my mind it is always dusk there in that Missouri trailer, always the end of the day when the sun wilts behind the hills and the grass is a blue shade of green. I don’t remember mornings there, and I don’t remember nights – only the cool blue of dusk as the sun is setting. These are my earliest memories.

I was only two, and I see those years through deep water. Images come back to me even to this day, delivered like unexpected lightning bolts when I pick up a wiffle ball or take the first suck of one of those ice pops in the clear plastic wrappers. I know there was a neighbor boy who let me ride his small motorcycle and play on his Atari 2600 – Pitfall Harry and Pacman. I remember wandering across the narrow street to his house and a kitchen that was a bit different than our own.

The clearest memory I have is of my Grandpa Beiler looking up at me. I stood, framed in the back door, the one without any steps, and he raised his arms to me, and I jumped down to him. It was a leap through the deep reaches of space, a leap for the ages. I imagine that he always smelled of KR and cough drops, though that could be my imagination. Was it him who always had bubblegum in his pocket, Big Red and Juicy Fruit? Was it him who popped out his false teeth and made strange, Munsch faces at me?

Later, when I was five or six and we had moved home, he paid me 25 cents to comb his hair on Sunday afternoons. He would usually fall asleep, or pretend to, football on the television behind me. But that comes later.

The strangest part of all is that I went back to that small Missouri town a few years ago, and someone pointed out the old trailer park where I had lived. I drove back the lane. It was tidy and clean, but not anything like I remembered it. For one thing, in my memory, it sat at the crest of a long, sloping hill, and behind our trailer – in my memory, mind you – the fields swept away, far and beautiful, always down, ending in a panoramic, prairie vista.

In reality, the trailer park was small, much smaller than I remembered. And there were no sweeping views behind the trailer where that old door to nowhere would have led. No, there was just a small, grassy back yard, and then a line of withered trees. Where did I get the that image of a never-ending view? Where did I get that vision of an unfolding slope and a Little House prairie?

Sometimes I wonder if our memories are more truthful than the facts. To me, as a child, that backyard went on forever. Perhaps it always would have, if I never would have gone back there to see it again. And who would have known the difference? I think I like it better the way I remembered it and not the way it is.

I wish I could unsee that line of withered trees.

To stay up-to-date regarding the books I’m writing and to receive bonus blog posts, sign up for my twice-monthly(ish) newsletter HERE.