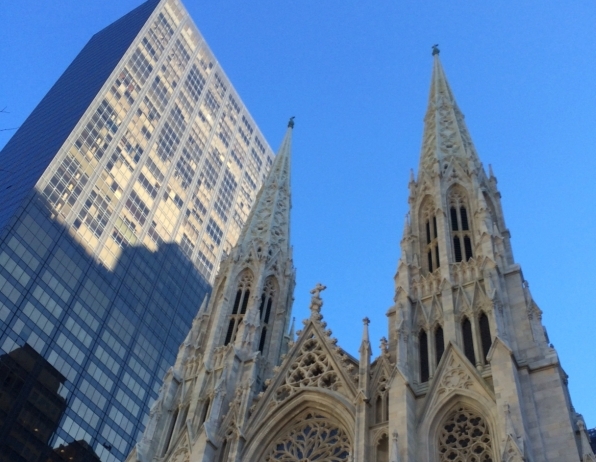 Hard times are coming, when we’ll be wanting the voices of writers who can see alternatives to how we live now, can see through our fear-stricken society and its obsessive technologies to other ways of being, and even imagine real grounds for hope…who know the difference between production of a market commodity and the practice of an art…

Seven months after my book released, I am coming to terms with my status as an ordinary author. My writing life is simple, and good. There is a book on my shelf with my name on it. There are the lovely reminders from readers that my book meant something to them. And I am learning to receive this as a gift: I’m not as big a deal as I always hoped I’d be.

I stood in the lobby of our hotel in New York City at noon on the day after Christmas, packed in a line of thirty mostly unhappy people. I still had my coat on, and I was warm, getting warmer. The bar stools were all taken, the sofas were full, and piles of luggage lounged on carts waited to be delivered to new rooms. Me and my tribe? We were just trying to check out. We had been in the city for 24 hours, had our fun, and were ready to return to small-city life.

The wait was long. I pulled out my phone and continued reading one of the best books I’d read in a long time, All the Light We Cannot See. It was the climax, the peak of the story, and in that moment I was no longer in a city of 8.4 million people. I was no longer waiting in a lobby surrounded by baggage, holding my phone. I was in France, in 1944, surrounded by the detritus of war. Smoke rose from the rubble and restless refugees wandered through a broken land. A young, blind, French girl asked a young, starving, German soldier a question.

He says, “Not in years. But today. Today maybe I did.”

I looked up at the television screens showing images of Times Square. I watched the bellmen and the receptionists and the bartenders scurry from here to there. I watched the people around me, complaining or reuniting or checking their phones, consumed by stimuli, seemingly oblivious to the startling, beautiful world around them.

Am I awake? Am I living my life?

I find myself feeling a little untethered at the end of another year. And what a year. We moved from forty acres of woods to a small sliver of city. My sister got married on a beach in Florida. My wife had a baby, number five, Leo Henri, our gentle giant. Soon after he was born, I was rushed to the hospital in the middle of the night, my colon blocked, my world shaking. A kind young father, a guy I knew from high school, passed away, leaving a wife and three children behind on this side of that dark passage. My parents sold their place, the basement of which has housed my family and I for two small chunks of very transformational time. I published a novel.

These years, they come and go, and some of them seem to pass like one breath leading seamless to the next. Other years are long sighs, or rattling coughs. Or gasps. Or the breath that comes through a smile. I’m still not sure exactly what kind of breath this year was, but it refuses to pass unnoticed, unrecognized.

As I stood in line in that hotel in New York City and read that passage from that heart-breaking, beautiful novel, I considered 2014 and I thought to myself, “Wake up and live your life.” Because if I’m honest I have to say that I slept through much of it, numbing myself with Netflix binges and an ever more encompassing cell phone addiction. I recognize in myself an inability to stop consuming the very things that are breaking me down.

I think we all feel that message at different times in our lives, to varying degrees: Wake Up. Live your life. I felt it strongly in 2001 when Maile and I moved to England and then again in 2009 when it was time to leave Virginia and come home. It came in 2011 when Maile and I started talking about traveling across the country. I felt it this summer when I realized, no, when I knew, that I needed to publish The Day the Angels Fell.

We all feel this message from time to time, this calling from comfort into discomfort, from predictable to not, when this hand reaches down and offers to draw us out of the rut we’re spinning in. For each of us, that call seeks to bring us closer to the center of ourselves, but it almost always arrives in the form of a question beginning with the words, “Are you willing…?”

For me? This year? I can sum it up for you in two questions that came to me through the mist of two powerful things I recently read, one shared by my friend Emily Freeman, and the other written by my friend Micha Boyett.

“Are you willing to see through our…obsessive technologies to other ways of being?”

“Are you willing to believe you are not as big a deal as you always hoped you’d be?”

I am beginning to remember the freedom that comes when I answer that call to Wake Up, no matter how nonsensical or counter-intuitive the ensuing steps may seem at the time. I’m beating around the bush, I know. The long and the short of it is this: the answers to these questions, in 2015, wait for me on the other side of something difficult, namely spending much less time on social media, less time blogging, less time building a platform for myself. It’s time, once again, to step back. Breathe.

I’ve come to enjoy Facebook and Twitter and the kind responses you offer to my blog posts. I’ve made real friends online, people I will stay in touch with through other means. But I also realize that my addiction to the short spurts of approval that come through Likes or Retweets nearly kept me from the long, concentrated time I required to write a novel that I’m very glad I wrote. I don’t want to watch the next five years pass and suddenly realize I have little more to show for it than a few hundred forgotten blog posts, a few thousand Facebook fans, or 1500 pithy Facebook updates.

I know you might ask, “Why are the two mutually exclusive? Why can’t you write and do social media?” I’m not sure. I can’t explain it. But for me, that’s just how it is. I have not been able to dive deeply into writing the novels I want to write…except during the year I took a break from blogging. Also, I must emphasize that this is not a value judgment on social media and it’s impact on society. Or on you. It’s a value judgment of myself, a realistic assessment of my capabilities, of how much I can handle, of what’s important to me, right now, and what it will take for me to Wake Up.

When I released The Day the Angels Fell just over a week ago, I was mostly nervous about one thing, and that one thing came up in a comment left by a reader of this blog. She wrote:

Looking forward to reading this once my head is clear. Finding ‘death as a gift’ a difficult concept at the moment.

How can death be a gift? How can the thing that separates us from those we love be a gift? How can other, less literal deaths (the loss of jobs, the giving up of things, the turning away from things we want) be considered something worth having? The last thing I’m trying to do with this book is diminish the pain we feel when we experience some kind of death.

I had a long talk with Caleb Wilde about this last week, and I’m still not sure exactly how it plays out, this idea of death being a gift. Yet I know this: stepping back from social media and blogging feels like a kind of death to me. But it also feels like an amazing gift. That, I think, is where the tension lies: the loss we feel when we encounter death does not always coalesce with the knowledge that death can be a passageway to somewhere or something better.

So what lies on the other side of this passage?

I will focus on the projects I’m being paid to write. I will begin writing a sequel to The Day the Angels Fell. Maile and I will take a trip to New Orleans, because that seems to be where the sequel will take place, and I want to look around, feel the place, walk the streets. In April and May we’ll tour the country, talk about the book and meet new friends and hear what you have to say about death being a gift, or not. Once the trip dates and locations are set in stone, I’ll post them here and send out an email to those subscribed to the list.

If you’re currently asleep, I hope you’ll consider what it might take for you to Wake Up.

If you’re currently experiencing some kind of death, I hope you’ll hold out hope for something better on the other side.

2 Replies to “On Waking Up, a New Year, and Why She Can’t Read My Novel Yet”