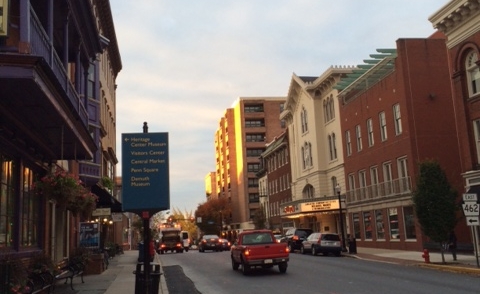 “Blessed are the meek,” Father David reads, “for they shall inherit the earth.”

There’s a weight to those words as we sit in St. James Episcopal Church. Outside, the sun emerges from behind the clouds and, for a moment, the church is lit up, the stained-glass windows glowing. But then the clouds sweep in again, and the light fades.

I walk through the early-morning city, traffic not yet lined up on the streets, the sun not yet risen above the eastern line of buildings. There are cars on the street, but not many, not yet. As I walk, steam billows from my mouth, from the exhaust vents of buildings, from those few cars that drive past. We create small, impermanent clouds that a nearly-winter breeze is quick to blow away.

Then I see him, a man approaching on a wheel chair. His lifeless legs are folded up under him, and he pushes himself along, strong arms, hard features. He has gray hair and hasn’t shaved for a few weeks. His eyes are nervous. He glances up at me as we cross paths, and he mutters something so quietly that I can’t tell if it’s to me or to himself.

I stop and turn and watch him roll away from me, up Prince Street, and I wonder.

Workers pull their trucks to the side of the road and jackhammers began tearing into the sidewalk, exposing the earth inches below the concrete, exposing just how shallow these cities of ours really are.

I come home later in the day and the sun is warm and the traffic is heavier. I approach the stretch of sidewalk that had been torn up and in its place is wet, shimmering cement, dark gray and waiting. They’ve made quick work of it and wrapped it all in yellow caution tape.

I have this urge to run home, collect my family and bring them back to that spot so that we can each put one hand in the wet cement. I picture the seven hands in a row, drying, filling with dust and dirt, the years wearing away at the prints. I want to leave something permanent behind, some reminder that we have been here. Though the rest of this shallow city may pass away, I want to remain.

But that’s not possible. Not really.

I turn the corner and there’s Melinda sitting on her milk crate across from our house on James Street. She waves, and I wave back. I wonder if she’s been evicted yet, as she had predicted. I wonder where someone like Melinda would go, in this cold. There’s Water Street Rescue Mission and a few other places. Where would I go, if that was me?

On Sunday, just a few days later, I ask my kids what they would do on that cold day if they were homeless.

“I guess I’d climb into that dumpster,” Cade says. We walk slower as we pass the large bin full of trash, and the weight of that thought makes a deep impression in the wet cement of our minds.

“…for they shall inherit the earth.”

In my naivete, I always thought of “the earth” in that phrase as meaning “everything.” The meek will, eventually, have it all. But maybe it’s not that, not even close. Maybe the meek will inherit the actual earth, the dirt, which at first sounds like a raw deal, right? Who wants to inherit dirt?

But then I think about this city and the impermanence of so much of what we create. These streets, these buildings…it wouldn’t take long for them to crumble and erode away. But long after that happened, you know what would still remain?

The dirt beneath it. The earth.

Maybe when the meek inherit the earth, what they’re really inheriting is the stuff that is permanent. The stuff that isn’t a few inches shallow. It’s not “the glitz,” as a friend of mine recently said, but the stuff on which everything else is built.

It makes me wonder what I’m inheriting, and what I want to inherit.

We hit the first Kickstarter stretch goal for my upcoming novel, so there will be some awesome illustrations in the book! I can’t wait to show you a few. The campaign is currently at $4,511, and if we can get to $6,000 in the next few weeks that means all the contributors will receive a free audio version of the book in addition to their regular rewards. Keep spreading the word!

I’ve been on a few podcasts lately in which I’ve been interviewed about my upcoming novel, The Day the Angels Fell. I had fun recording them with some great folks and you might enjoy listening to them. Here are the links:

“How to Crush Kickstarter,” recorded with The Storymen: Matt Mikalatos, JR Forasteros, and Clay Morgan.

“Shawn Smucker on Writing Fiction” on the Schnozcast with Bryan Allain

And coming soon, an interview I did with David Mantel on “The Broken Light Show.”