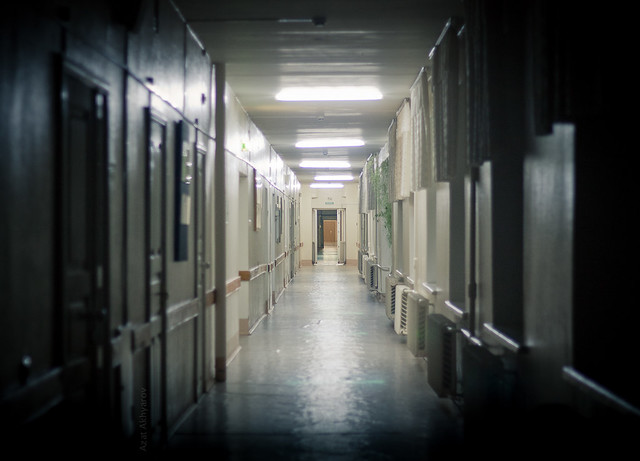 Rising up out of the murky waters of anesthesia, I realize they are wheeling me back to my small room. I lay there, coming to my senses. I am at the doctor’s office. I just had a colonoscopy. Maile is in the waiting room.

The doctor comes in and asks me how I feel. He reviews the images with me, but only a few phrases stick in my mind: “very advanced stage of Crohn’s disease”…”removed multiple polyps surrounding what looks to be the early stages of a fistula”…”recommending medication you would have to take through an IV once a month at the hospital.”

I nod, nod, nod, knowing this is when you should ask questions, but my mind is still not there. I make an appointment for three weeks down the road for another consultation, then walk out to where Maile is waiting for me.

I lay in another bed, this time my own. I stare at the ceiling and listen to the traffic going by on James Street. The ceiling fan spins. Maile gets up in the darkness, retrieves Leo, and feeds him. He is three months old with his whole life ahead of him. This is how the night passes when you stare at the ceiling.

This is a strange thing to comprehend, when you are 37. It brings to mind many things, and moving slowly to the forefront is this glaring thing called my mortality. I will die.

I lay in bed, staring at the ceiling.

I am not a spontaneous person. I spent six months researching laptops before I bought my last one five years ago. I rarely make big purchases, go on last-second trips, or drop by unannounced. I am rather hobbit-ish in nature, and while I enjoy a good adventure from time to time, any day spent alone in my office is a good day.

For a week or two leading up to my colonoscopy, I had been talking about getting a dog. Maile’s response was lukewarm at best.

“It would be nice for you to have a dog in the house when I’m away,” I suggested.

She stared at me.

For some reason I chose to only hear the middle part of that, so on the Friday after I had my colonoscopy, I went out and bought a boxer.

I don’t even know who I am anymore.

When I called Maile on my way home and told her about our new boxer Clementine, she burst into tears.

A few days after I brought home THE DOG, Maile looked at me across the table and asked me one of those questions. It came during a particularly emotional conversation. Maile may have cried. I may have sighed a lot. Then she asked me,

“Do you think you got the dog to distract you from this Crohn’s disease?”

Yes, that’s the sound of the wind getting knocked out of me.

There are dozens of things I could have been diagnosed with that would have been worse. Crohn’s is not a death sentence, and I’m hoping that with meditation and exercise and a diet change and prayer (and as little medication as possible), I can go into remission and stay there. My aunt is battling cancer; my friend’s father is grappling with ALS; others I know deal with chronic pain and severe disabilities. Crohn’s is none of these.

I think, at the end of the day, the reason the diagnosis affected me the most is that it reminded me that I will not be here forever. I don’t think this is a bad thing to be reminded of. I think it’s something we all need to think about, from time to time. But when a simple reminder of that fact feels like such a huge blow, I have to wonder.

What is it about the way I see and live my life that makes it so difficult to ponder my death?

It’s been a rough seven days. Last Tuesday my truck got hit-and-run while parked on the street in front of our house. On Saturday the van we were borrowing (while my truck got fixed) broke down and left us stranded while we were trying to get to a retreat. Today we found a new home for our dog, a sad day, and when I went out back to get the rest of her stuff I realized my bike had been stolen.

I’m starting to feel like I’m living in a country song.

But even after all of that stuff, I still remember how I felt walking out of the hospital after my recent three-day stay. I still remember how happy I felt to be out, to be alive, to be walking down the street on a beautiful summer day. Alive. I felt very alive, but more than that, I felt very thankful and determined to live a life that valued the things that are important to me, not the things that are urgent or demanding my attention or even the things everyone else thinks are important.

I don’t want to lose that feeling. That thankfulness.

That is what I keep coming back to.

10 Replies to “On Buying a Dog, Colonoscopies, and What It All Really Means”