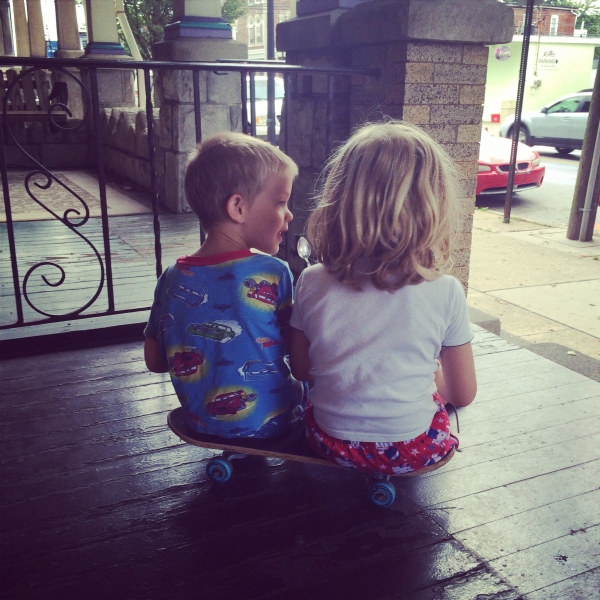 I listened through the open window, and because I stopped and waited and listened I could hear their tiny voices dancing through the summer day, accentuated by the metallic strike of a hammer on a nail, the thunk of hammer on wood (missed!), the raspy sound of the shovel as it shoved into our narrow strip of city yard. They are five and six years old, the two of them, and their voices were serious.

I listened through the open window and they talked about building a tree house out of only a three-foot long board and the ten nails I had given them earlier, five in each dusty palm, five white nails that they held like magic seeds. They raced outside and one began digging and the other began nailing and that’s how it went for an hour or so as they planned and schemed the massive tree house they would build in the tiny tree that lines our city yard. Out of one small board. And ten nails.

Truly I tell you, unless you change and become like little children, you will never enter the kingdom of heaven.

I spoke with Kelly Chripczuk the other day and we were talking about trust when she said something that made my ears perk up, something along the lines of,

“Until you lose your identity (as a writer or preacher or student or whatever), there’s so much pressure. Too much pressure. There are people to impress and a reputation to uphold. But once you can let go of that identity, it allows you to play again, like a little child, to create things and not worry about what anyone else will think.”

To play again, I thought to myself. This is what I have to allow myself to do.

I immediately thought of the novel I’m releasing this winter (I’m sorry if I’ve been talking about that too much, but it’s on my mind all the time, and to be honest I’m still terrified of freeing it into the world). But after talking with Kelly, I thought, That’s it! It’s all just play, this creating and conjuring and sharing of stories.

I enjoy writing stories too much to let what other people might think stop me from writing, from creating, from producing and sharing. When it’s me and all these potentially critical readers, I feel myself drawing inward. When it’s me and and the story, just us, and I’m making things up and chuckling to myself and nearly crying, that’s it. That is a life I could live and enjoy and be at peace.

That’s me in the back yard with not enough materials, not nearly the right tools, and ten measly nails. Making plans. Digging in the dirt. Climbing trees.

What do you wish you could start believing for again?

10 Replies to “What I Heard My Children Saying (or, What You Can Do With Ten Nails)”