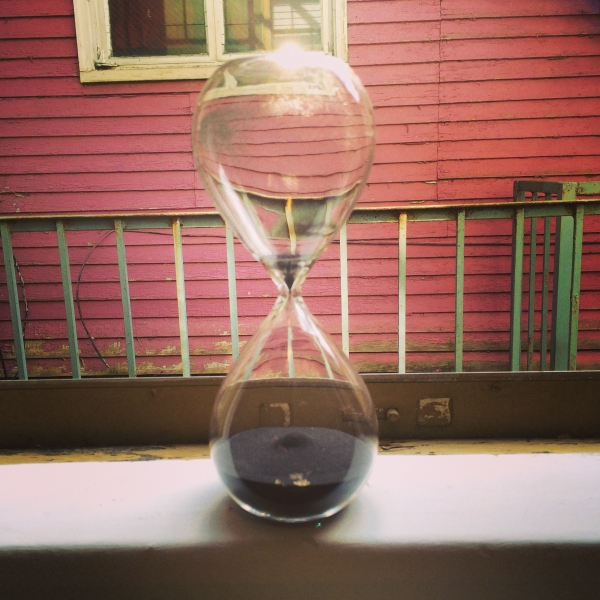 Stop me if I already told you this story.

I didn’t have any writing work when Maile, our kids, and I returned from our 10,000-mile, cross-country trip in 2012 (You’ll remember that trip in all its glittering detail if you’ve read How to Use a Runaway Truck Ramp). Two or three projects that had been lining up fell apart at the last minute, and what we had hoped would be a quick one-month transition in my parents’ basement turned into an unexpected eight-month stay. (You’ll remember that basement; it’s the same one I wrote about in Building a Life Out of Words.)

(No more book plugs, I promise.)

So there we were with no idea when my next writing project might come in. Trying to figure out which credit card to put that week’s groceries on. Deciding which bills to pay and which to pass to the next month.

That was one of those times when all those little voices start up, voices of doubt and cynicism, the Voice of Responsibility and the Voice of Practicality and the Voice of Look At What All Of Your Friends Have. I started to feel just a teensy bit like a big fat loser of a husband who couldn’t even make enough money to take his wife out to eat every once in a while. (In the mean time, look at Facebook! Look at Twitter! Look at Pinterest! Everyone is so happy and everyone is rich and everyone is eating out!)

I caved under the pressure. I called some friends who called some friends and eventually a friend sent me an email about a warehouse job. It wasn’t much but it was something. Maile and I ran the numbers and realized that if I worked 45 – 50 hours a week (plus spent five hours on the road each week to and from work), and if I paid for health insurance for the family through the company’s plan, and after I paid for gas just to get to work, I’d make a whopping $1500 / month.

But I didn’t think I should take the job. Not just because of the money, either. I knew that if I took that job, I would be walking away from something very important to me, something I’d already sacrificed three years to attain: writing for a living. And once I had that job eating up all my time, I wouldn’t be able to take on writing projects even if they did come up. I knew how hard it had been to walk away from regular income before, and I didn’t know if I’d have the strength to do it again.

But it was real money, not play money in some far-off pretend future fantasy. $1500. I didn’t know what to do.

I’ve been getting these emails a lot lately. They go something like this:

Shawn, I was just like you. Trying every product
under the sun for the last THREE years..

I failed and failed…

Then, I found this: Amazing video revealed

After much prayer and deliberation and counsel, Maile and I decided I should pass up on the job that would make me $1500 per month. We both believed that something would come up. That was a Sunday afternoon, when we made that decision.

On Monday we received two checks. One, from a relative, for $500. Another, a cashier’s check in the mail from an anonymous donor, for $1,000. We unexpectedly made, in one day, what I would have made working for a month at the warehouse.

I actually have no idea what the point is to this story, because I also know plenty of people who made the leap into self-employment or living out their dream and had to crawl humbly back when their plans didn’t pan out. Unlike the network marketing salesmen, I can’t promise you a certain level of income after a certain number of months or years. I don’t know why I’m so fortunate. But I do know one thing.

I went six months after that decision without making any real money, and I didn’t once regret my choice not to take that job. Because I knew I was doing what I was supposed to be doing. Writing my blog. Working on my own projects. Trusting. And in the midst of all that, my friend Matthew Paul Turner invited me to go to Sri Lanka as a World Vision blogger. I never would have been able to do that if I had just taken that warehouse position. And then in December I finally landed my next project, a dream job in which I got to travel to Istanbul and write the powerful story of an amazing man.

So maybe that’s the only real point to this story.

Don’t give up. Stick it out one more day.

Keep working on that novel. One more chapter.

Don’t close your business yet. One more day.