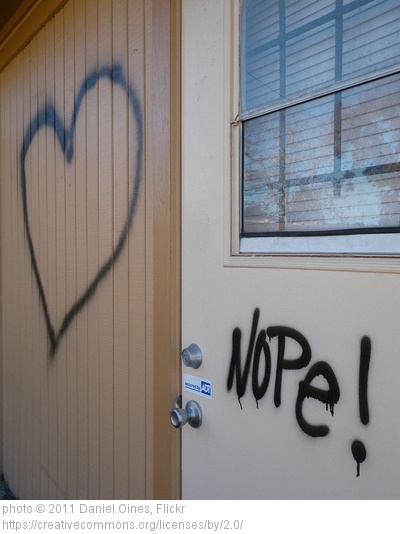 This week’s #OvercomeRejection post is brought to you by Amy Young. Please submit your story about how you overcame rejection to smucker.shawn@gmail.com.

Um, Amy, the encouragement is too long.

It was a Tuesday morning and my boss sheepishly looked down as he delivered a message sent from higher up. It was in reference to a weekly encouragement I added to the bottom of a business email sent out to teachers spread around China.

Can you come in here, Amy? He asked the following Tuesday. You used too much scripture this week.

I inhaled slowly, knowing he was the messenger and could hear the absurdity of it himself. Slowly I exhaled.

By the third week I was at my wits end. You’re connecting too much.

It was never spoken, but we both knew no matter how much I changed it, he’d be reprimanded as my supervisor for not “keeping me in line” better.

I was aiming at a moving target. Having made the encouraging word shorter, the problem moved to scripture. Reducing the amount of scripture, I was connecting too much. What was the common thread in all three? Me. After about 18 months of writing the weekly messages, I pulled the plug on the spot, knowing it wasn’t my writing that was being rejected. It was me.

Feeling helpless, my boss made several suggestions. “You could …” But each suggestion seemed more about assuaging him and the ways in which he had to desert me because we both wearied of the weekly communication from headquarters and these conversations, which seemed unlikely to change.

This wasn’t my first rejection. Mercy no. But it’s the rejection I remember. How do you change who you are? Too long. OK, I’ll shorten it. Not the best fit. OK, I’ll look for another home. Even comments like your platform isn’t large enough sting but understanding money is on the line, as much as I wish it weren’t true, they’re right, I don’t have a large platform.

I didn’t know it then, but that moment in his office became a stone of remembrance, marking the beginning of the long and slow goodbye with a job I had loved and deeply identified with. A job I was good at and where I experienced success and satisfaction, even joy.

I went radio silent on my writing. Keeping up only work email, letters, and newsletters to folks back in the US praying for me.

Rejection hurts and to move too quickly to salve the pain seemed like an act of false peace.  I didn’t want to wallow in it, as many didn’t even know I’d been rejected. But I also didn’t want to pretend to myself and those near me it hadn’t happened. I sought holy space to honor the rejection and, paradoxically, the ways I could now more fully identify with Christ and his rejection and betrayal.

More than a year later a friend said, “You should write a blog.” And though others had suggested it before (one of them being my boss on that day) the timing was right. Not all rejections end up being the birthing pains to something good and a piece of me revolts at this tidy, happy ending.

But in truth, the tidy happy ending of the launch of my public writing has also brought a long hall containing more doors that have the potential for rejection than I ever imagined. Paradoxically, they have also held the promise of more joy and connection than I could have anticipated. And so, like you, I keep showing up each day, not sure if the door before me will open or close.

Amy Young is readjusting to messy middle of life in the US after more than twenty years in China and the recent death of her dad. When she first moved to China she knew three Chinese words: hello, thank you and watermelon. Often the only words really needed in life. She is known to jump in without all the facts, and blogs regularly at messymiddle.com and tweets as @amyinbj and is the most unbeautiful pinner Pinterest has ever seen (but she’s having fun!). Want a free book? Sign up for her quarterly newsletter and Signs of Eden Regained is YOURS.