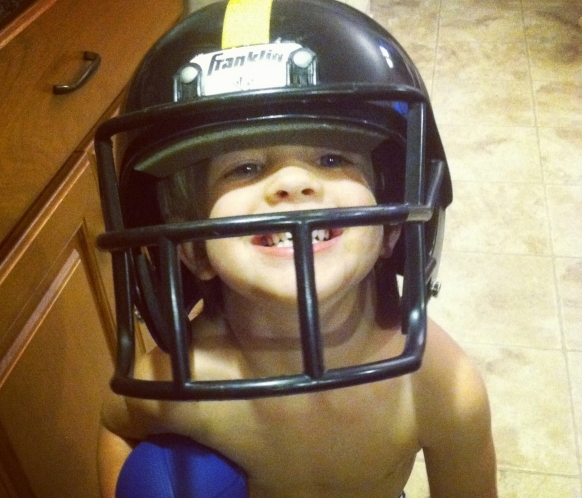 “If you don’t want to know the baby’s sex, now is the time to look away from the screen,” the ultrasound tech said, so Maile closed her eyes and I looked down at the tiles.

“Would you mind writing down the sex on a piece of paper for us?” Maile asked, her eyes still squeezed shut. When she closes her eyes like that, she looks like a little girl, I thought to myself. I thought of Madeline L’Engle’s words:

“No problem,” the man said. He was a straightforward man with a kind voice and very little expression.

“Do you ever, you know, is it always easy to tell if it’s a boy or a girl?” Maile asked, trying not to express any doubt in the man’s unquestionable abilities as a magic waver of the ultrasound wand. He looked at her and waited just a second before answering. The pause gave his words added effect.

“At 20 weeks, it’s easy to identify the baby’s sex,” he said, matter-of-fact, like an elementary school teacher answering a child as to whether or not one plus one always equals two.

So that was that. He folded the slip of paper and put it inside an envelope. Written on it was either the word ‘boy’ or ‘girl.’ My sisters would take the envelope to a friend of ours who makes cupcakes, and she would open the envelope and then fill the cupcakes with blue if it was a boy or pink if it was a girl. On Sunday at my parents house some family members would gather and we’d count down and bite into a cupcake and there it would be, boy or girl, the new shape of our family.

We never did these sorts of things with our other children. We always waited to find out until the final push, the first little wail, the anguish-ecstacy of a life breaking into the world. But these are new days. New times. And we are, all of us, changing.

“So what are you hoping for?” everyone asks, and in the past I would have said “A healthy baby” or, if I was feeling particularly ornery, “A human.” But now that I’m older I hold myself to a lower degree of scrutiny. I am less affected by what I used to consider weaknesses of character. I am who I am, and while I still strive to become a kinder presence in the world, use a softer voice with my children, and be more sensitive to the needs of my wife, I also understand that God loves me deeply, just as I am.

So when people asked me what I was hoping for, I answered in a straightforward voice without hesitation, “A girl.”

And I did hope for a girl. At first I wasn’t sure why. I love my sons fiercely and tenderly, so the thought of another son wasn’t something that filled me with bad feelings. This made me even more curious. Why do I want a girl? Then it came to me, through the foggy cloud of self-awareness and personal history.

I didn’t know if I had it in me to be a good dad to three boys. Two already stretched me. I remembered the amount of time my dad spent playing ball with me, the only boy. I remembered growing up with a sense of uniqueness, the only son of Merrill Smucker, the oldest child. I have a very good father.

Parenting girls has never weighed on my mind. Perhaps because I grew up with three sisters, or perhaps because some of my best friends as a child were my female cousins. Whatever the cause, I feel relaxed with my girls, sufficient. I feel that the love that I have for them will be enough.

The arrival of  our fourth child, and second son, Sam, was a surprise to me. I think I always assumed I would have one son, that I could be the same father to my boy as my father was to me. But as Sam grew up, I found myself fighting off feelings of inadequacy. I didn’t have time to play ball with both of them, separately, every day, as my own father did in my memories. I didn’t have the energy to be what I felt Cade and Sam needed me to be. I couldn’t be the same dad to them that my father had been to me.

So at the thought of having another boy, I felt myself shrink back. The voices in the back of mind stepped closer to the foreground.

You should be a different father than the one you are.You could be a better father to your sons.

“So, what are you hoping for?”

On Wednesday night, four days before the planned revealing of baby number five, we got snowed in. Our half-mile lane was blanketed in two feet of snow. There was no way we were going anywhere, at least not for a few days, so we holed up in the house. I stacked wood outside the house for the woodstove and Maile made all kinds of delicious food for the stretch ahead of us.

On Friday, I started getting a toothache. A bad one. And not only were we snowed in, but we had no pain reliever in the house, nothing, and my dentist was closed for the week. I spent Friday night soaking my mouth in ice, then miraculously drifted into a long night, a fitful sleep.

Maile would dream that we had a boy, but that by the time he was a toddler we still hadn’t decided on a name for him. A little boy walking around, nameless, us still undecided.

On Saturday things didn’t look much more hopeful. My neighbor usually plowed our lane, but his plow wasn’t large enough for this amount of snow. My friend who had a plow had been plowing for his business for 48 hours straight and couldn’t get all the way down to our house in the southern tip of the county. The revealing for Baby #5 was 24 hours away. My sisters threatened to go ahead without us. Then my dad swooped in.

“I’m going to come down and see if we can figure something out. Plus, you need some Advil,” he said. He called me 45 minutes later.

“Hey, I’m out here at the end of the lane and I can’t get the Jeep in. I’m going to ask around and see if anyone has a plow.”

He called back thirty minutes later.

“Do you know your neighbors?” he asked. “You’ve got some really nice neighbors. I talked to the couple in the house at the corner and she’s calling around for someone to come plow your lane. Then I met a little old lady who lives in the small house across the road. They’re trying to help, too.”

Let’s be honest – I’ve lived at the back of that half-mile lane for a year-and-a-half, and I’ve met one set of neighbors. Now my dad comes down to our area and in the span of 45 minutes he was best friends with everyone on the block.

As I hung up the phone, it hit me: I am not my dad. I would have been content to wait until the snow melted, or to sit tight until a friend found the time to come down and help us out. But my dad was canvassing the neighborhood for help. I could have lived in that house for ten years without meeting our neighbors, but my dad got to know them all, and remembered their names, in less than an hour.

And that sentence flashed through my mind again, like a bolt of lightning.

A burden the size and weight of a two-foot snowfall lifted from my shoulders. My dad was a wonderful example to me of what a dad should be: loving, accepting, encouraging. He challenged me to make good decisions and to accept responsibility when my decisions were off-kilter. Those are things I can do for my boys. But I don’t have to be him. I can be the dad I am to my sons (and my daughters).

In fact, I have strengths as a father that my dad did not have. If I have a third boy, it will be okay. And I will be enough.

We sat around the table and one of my sisters counted down from three to one. Everyone took a monster-sized bite out of their cupcake (except me – you know, that toothache – so I just pulled mine apart). And then, unplanned, unrehearsed, everyone shouted out together.

I found myself getting unexpectedly emotional. And so happy. Because I will be a good father to this third boy, of that I am determined. I will be the father he needs.

I looked at Maile and she was crying and I smiled.

“It’s a boy,” I said, shrugging my shoulders, laughing, because it was the kind of joy that forces you to respond.

It was the distance between trying to be someone else, and then suddenly discovering that I am sufficient.

(I’m going to begin posting once a week. The posts might be a little longer, but I’m going to settle into this rhythm for a bit while I work on some other projects. I hope you’ll keep coming by – look for new posts every Wednesday morning.)