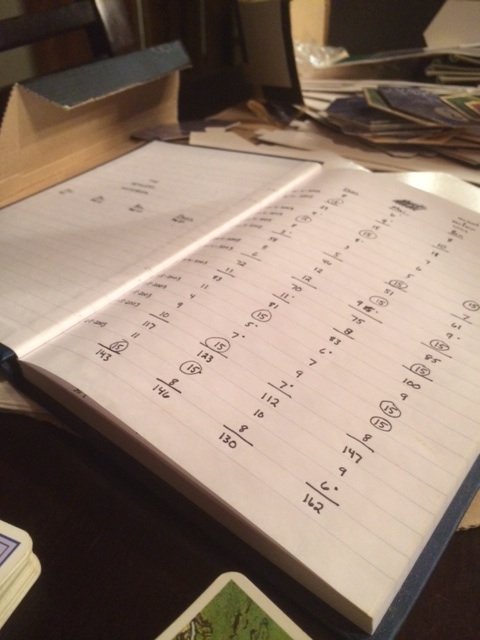 On Monday night we took out the old Doc Marten’s shoebox and opened it up. You have to hold it in a certain way so that it doesn’t completely disintegrate in your hands.

So Maile and I started sorting through plastic bags of cards and pieces, all while explaining the rules. The robber. The harbors. We couldn’t remember if it was clay or brick. Oh, well. And that’s how the next fifteen minutes or so went.

Then, at the bottom of the box, I found a blue notebook. I opened it. Inside I saw four names: my sister’s, my brother-in-law’s, Maile’s, and me. Under our names was a long list of scores, a system we had created in order to keep track of who won the most games over a fairly long period of time.

We spent many an entire Saturday there, in their apartment, playing Settlers for ten hours straight. We were hooked.

Those England times were long days. Long years. There was the time we opened our first store in Victoria Station – we were so full of hope, and I worked 33 17-hour days in a row. Then there was the time, three years later, that we closed Victoria Station, my brother-in-law and I packing up the shop, removing all the equipment, slowly lowering the clackety-clacking storefront shutter one last time, then walking through the empty, late-night train station, wondering if we could have done something different, something better.

“Check this out, Maile,” I said, holding up the book. She smiled.

I held the book closer to her and she peered in at it. Then she took in a small breath.

The date of our last recorded Settlers game was eleven years to the day. January 6, 2003. That seemed ironic. A lot can happen in eleven years. Four children, two miscarriages, one on the way. One job, three businesses, two of which ended without much fanfare. Ten books. A lot of white hairs.

A lot can happen in eleven years.

The passing of time reveals itself to us in the most random, powerful ways. Which means you can’t always be on guard or prepared for how the next thing you stumble on will remind you what you were doing ten years ago, twenty years ago.

What would I have thought if eleven years ago God or an angel or someone, anyone, would have told me what I was about to go through in the next eleven years? What if they could have walked me down that path, in advance, preparing me for what was to come?

We have no idea where we will be in eleven years. No idea what disasters and triumphs will come our way. And what a blessing that is, our lack of foresight. For all of my impatience, all of my striving to bring the future into the present, seeing that list of scores and the date, January 6th, 2003, gave me an incredible sense of peace, and a resolve to live in this moment.

The future will take care of itself.