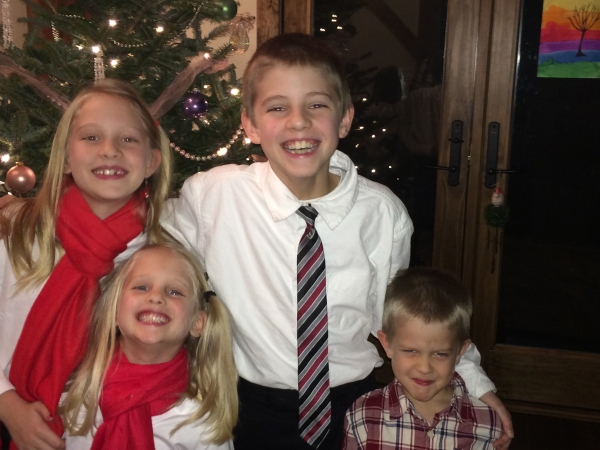 In mid-November we decided to tell our four kids that there was a fifth on the way. Their reaction was not exactly what we had expected.

“Everybody come up to our room,” I shouted downstairs. “Mom and I have something to tell you.”

The sound of eight little feet pounded up the steps, slip-sliding their way into our room. All six of us crawled up into the bed. The kids eyes were large and curious – that is where we have the most serious of conversations, in our room, sprawled on the bed. This is where we talked to the littles about, as Sam calls it, “private-cy.” This is where we read together. It is, in other words, Holy
Ground.

I found myself getting more and more excited to finally tell someone. Anyone. We had been keeping everything quiet, keeping our hope caged up like a small bird. But here it was: a chance to tell. I wondered what it would be like. I wondered if, in saying the words aloud, it would seem more real to me.

“Mom and I have something to tell you,” I said quietly, anticipating their cheering and shouting. I paused for a moment.

The response was not what we had expected. Let me rephrase that. The response of our oldest two children (ages 10 and 8 at the time) was not what we had expected. The younger two leaped to their feet and cheered. Sam screamed with delight, over and over again, “I’m not going to be the youngest anymore!” Abra grinned, her blue eyes wide and full of hope.

But the older two. Ah, the older two. I keep forgetting they are full-fledged people now, with their own hopes and dreams and expectations. Cade’s eyes filled with tears and his lip got all trembly. Lucy openly wept. Maile and I looked at each other. What had we done?

“What’s wrong?” Maile asked, on the verge of tears herself.

“I…don’t…really…want…our…family…to…change,” he said, balling up his fists and rubbing his eyes.

I leaned over and put my arm around Lucy.

“And why are you crying?”

In the most mournful voice possible, she replied.

“I don’t want another baby to die,” she said, through those hiccup-sounding sobs, then burst into tears again. Lucy had taken the previous miscarriage very hard. She had been seven years old, and very much looking forward to a baby to treat as her own. For her, the possibility of encountering that pain again was a scary, overwhelming thing.

Maile and I looked at each other. I was hugging Lucy and she was holding Cade’s hand. After ten minutes of assuring and reassuring and explaining and encouraging, the four of them went back downstairs, returning to their busy childhood lives.

I turned and looked at Maile.

I realized that the reactions of my oldest two children pretty much sum up the foundational fears of most of humanity. Most people I know avoid change because it’s scary and unknown and makes us feel insecure, like a soft-shell crab. And you don’t have to look far in our culture to find the fear, or denial of, death. We flock to any remedy that keeps us younger, our hair less gray, our skin less wrinkled, our age less apparent. We want to be young forever.

We surround ourselves with noise because at the heart of silence lies an awareness of our mortality. Noise helps us forget the steady, onward march of time and the inevitability of our passing.

The reaction of my oldest two children has me thinking about the coming year. Because, a baby! It’s not that both of them won’t be ecstatic to have a baby in the house. But the fear of change and the fear of death steered them away from wanting this new thing, this new adventure.

What changes are you avoiding because you’re afraid?

What potential deaths (failures, mistakes, the end of a relationship, potential discomforts) keep you from moving into an area of life where you know, deep down, you want to go?

Related Post: Miscarriages, Waiting, and “Do Not Be Afraid”