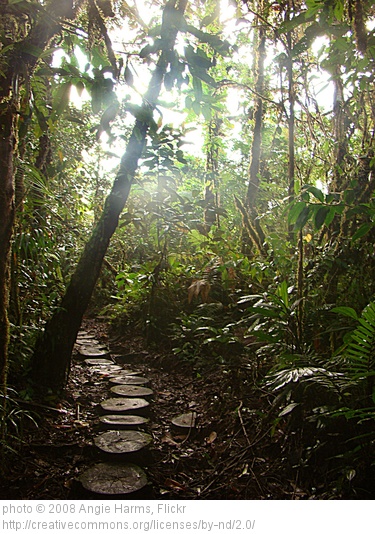 It’s a strange place to be, this particular spot in life where we’re too committed to the current path to even consider going back. Do you know what I mean? Have you ever reached that point?

Before this, there was the beginning. The starting out. The hemming and hawing and difficult decisions and the voices – oh, the voices! – protesting and arguing and whining. There was that sense that our feet were far too tender for the path we were called to travel. A lonely path. A path few understood.

Then, when we finally started off down this narrow way, there were the (many) places where it was hard not to look back, and while looking back, hard not to turn back. That was the place of second guesses and curious road blocks. That was the place where the launching point was still in view, still attainable, still turn-back-and-findable.

But the last six months have been a machete slicing its way through undergrowth. The path, once felt so defined, vanished, but the place at which it melted away became its own launching point, and with all the slashing and breaking, the stinging and stooping, we completely lost all sight of where we’d come from. We stopped and we looked around and we marveled at the silence. The peace. The unrecognizable.

When that realization hits, that the way back is no easier than the way forward, the first sense is panic. How did we so easily lose our lifeline to that place of safety? What now? Where do we turn? There is, at that point, no greater temptation than to sit down and cry a river of tears and hope you can somehow drown yourself in their shallow stream.

But we did none of those things. We kept moving forward. And we learned something rather shocking.

And who is to say that one is not found in the other?