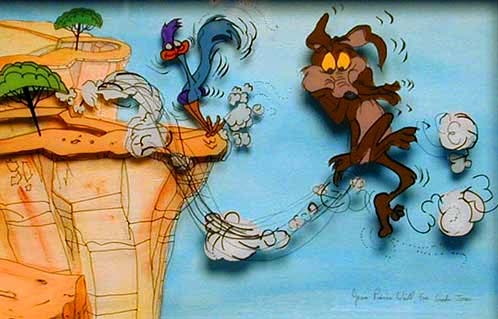 In a last ditch effort to avoid driving the nation over the quickly approaching “fiscal cliff,” Democrats and Republicans finally agreed on something and called in two high-end consultants: Wile E. Coyote and Roadrunner. It was a brief show of solidarity emerging after weeks of name-calling and insults.

Earlier reports remained full of uncertainty as to the exact identification of the consultants, but it was soon confirmed when multiple wooden crates (labeled “Acme”) were discovered floating in the Potomac. Various explosions and an annoying “beep! beep!” also emerged from the White House from time to time.

One Senator (who wished to remain anonymous due to security issues surrounding the negotiations) was asked why these two were chosen over other, more experienced financial heavyweights like Warren Buffet or the Chairman of the Federal Reserve.

“It’s business as usual,” the Senator muttered, pushing past the microphones. “They’re looney tunes in there. Someone got fixated on that “fiscal cliff” term and argued that Roadrunner always avoided the drop-off. But Wile E. Coyote keeps interrupting with his British accent. It’s throwing everyone off their game.”

Sources say no meaningful concessions were made by either side. As frustration increased, Democrats began calling for Roadrunner’s IRS returns, wondering if perhaps they were dealing with another wealthy individual trying to avoid higher taxes. Republicans, meanwhile, questioned the status of both consultants’ nationality and began processing deportation papers.

It would appear the government is trying to save face tonight as box after box of Acme products have been removed from the Congressional buildings. These include, but are not limited to, an anvil, multiple detonation devices, and rocket-powered roller skates.