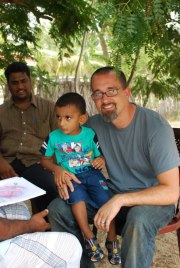 Once upon a time a 16-year-old girl in Sri Lanka didn’t want to go to school, and who knows if it was because her father drank and brought his buddies to the hut at night or if she had trouble with kids at school or if she was simply sixteen and not wanting to go. Who knows.

But the 16 year old’s mother had been working in Saudi Arabia for seven months because the fights with her husband were too much and she wouldn’t come home, even when they begged her. So the girl took care of her two younger sisters and her younger brother and her father sometimes traveled 50 miles to make 500 rupees a day ($5), and most of it was spent on travel and lunch before he even got home.

So the 16 year old wrote her name in blue chalk on the plywood walls outside of their hut. Her younger sister dreamed of drawing and art and being a teacher. Her youngest sister smiled and stared with big brown eyes at the strange people sitting in a circle of chairs. And her little brother clutched at the strange gifts they brought.

Once upon a time a Sri Lankan husband and his wife moved into apartments supplied by a factory on the condition that they work six days a week, ten hours per day. Which they did until after their second child when the mother tried to take a few days off and they got kicked out. So now they live in a hut with their five children and the oldest works at a hotel on the weekends so that he can pay for drum lessons and the father tries to find work on coconut plantations and makes 600 rupees per day.

And sometimes they do not have enough food, so the father and mother do without. And sometimes they have less food, so the older three children join them in not eating, and they can do it because they understand that life is hard. And sometimes, during the rainy season when they run out of food completely and have to stash all their stuff in the roof beams of the hut, no one eats, not even the little ones, and they cry all day in the mud because they are hungry and because they do not yet understand that life is hard.

Once upon a time, a 35-year-old man lived in Pennsylvania with his wife and four children. And he was disappointed because he lived in his parents’ basement for a short time, and the space seemed small – only a full bathroom with running water and a toilet, one large bedroom, a kitchen, and a living room, all carpeted and temperature controlled.

And he had access to fresh water and not much money but enough to buy groceries and pay bills and have two cars and educate his children. And he ate when he was hungry. And he slept without worrying. And his children had everything they needed, and could become anything they wanted.

Then he traveled to Sri Lanka and he met these people. And the amount of money required to change their lives – only $35 a month – caused him to sit quietly because he had just spent nearly $400 on his vehicle inspection before he came on the trip, and that would have covered a child in Sri Lanka for a year.

Friends, I have seen an amazing thing this week. As my friend Roxanne Wieman has written, I have seen the end of poverty. Perhaps not on a global scale, but I’ve seen a community be restored. After 15 years of involvement, World Vision has backed out of a small area of Sri Lanka, and what is left is a vibrant, self-sustaining community.

I don’t usually ask for much here at the blog, but this is something I’m asking you to seriously consider. I’ve seen what World Vision does in action. I’ve met the staff making it happen. I’ve seen the people helped.

And I’ve seen people waiting to be helped. People like the families in the stories I’ve mentioned above. Your $35 a month will change the trajectory of their lives. Please.