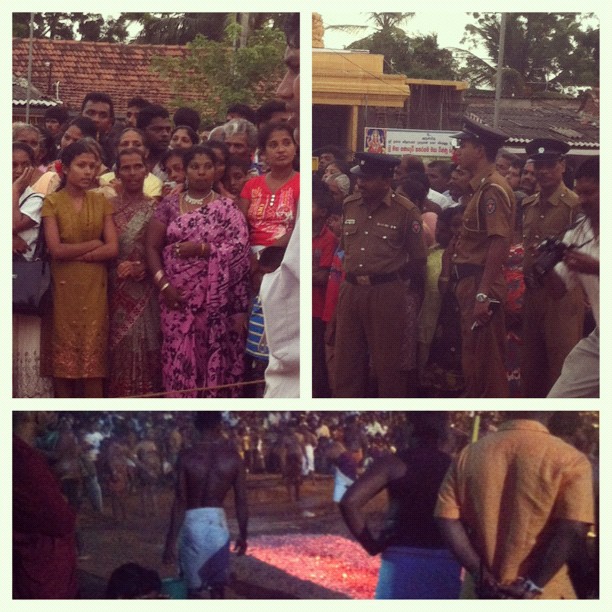 The crowd was full of dark eyes and bare feet and rustling movement. They were shadows and flowing clothes and rich skin. I wanted to go unnoticed, shrink down to a spec of dust and float in and out of their traditions. But I couldn’t, so I walked clumsily, thick-soled, through their festival. And they were gracious with my inadequacy.

Cows wandered the narrow walkways, thrusting wet noses and probing tongues, bucking massive foreheads into the crowd, searching for the leftover rinds of offerings already given. Men raised coconuts two-handed over their heads and smashed them into a broad tub so the milk dripped down through a reservoir, the loamy smell of it hovering over the crowd. A pleasing sacrifice.

One man, seeking a path through pain with the help of the gods, wore shoes made of upturned nails, the points poking into his feet. He was old. And toothless. A young boy walked ahead of him, clearing the way, swinging something back and forth, back and forth.

The nail-shoed man looked at me, ringing his bell, and people came to him from all directions, pressing bills into the dark hole of a small container hanging around his neck. Still he rang his bell again, his glance pushing up against me the way the cows probed the crowd, searching only for leftover rinds. I had nothing for him, except for the thought that I did not know that kind of devotion. But those were poor alms, those thoughts, so I turned away, and his eyes pressed into my back like the heat from a dying fire.

I pushed my way to the edge of the crowd now ten rows thick and pressing up against a large corral perhaps fifty yards long and thirty wide. Already a thousand had gathered, filling the surrounding streets, peering, craning, jostling for a better view through the rows of shoulders and upraised arms and extended necks. Already the crowd began the transformation from a group of individuals to a single organism. A flock. A hive. Individuals can be read, their expressions interpreted – crowds are less predictable, and their moods change quickly.

Inside the circle, half-naked men used fifteen-foot sticks to probe the fire, break it down, spread the coals. The ground glowed, a particular brand of holiness, and while some men poked at it, others fanned it with giant fans, birthing sparks and a heat that drove them back to where still other men doused them with buckets of water. They sputtered in that coolness and smacked sparks from their skin.

Then, as dusk fell, a police officer asked if we wanted to watch from the front row. He led us inside the fence to a small area of empty space in the midst of the crowd. Matthew went up closer to the fire, and one of the men motioned that he wanted his picture taken. I felt like a visiting dignitary. Our movement to the inside could have been an affront to the large organism, the crowd, and I kept my eyes down, avoiding their disapproval. But they smiled at us, and their children stared.

I don’t know when the drums started, but I know they weren’t pounding quite yet when the first masses of people defied the fence and the police and pressed into where we had been given special access. Now we were surrounded, bodies pressing against ours. They shouted for everyone to sit, and at first we couldn’t bend our knees – everyone was packed so tight together. But with enough adjustments and half-turnings, we got to our knees, skeptical pilgrims. The man beside me threw small stones at people in the front who would not sit down. He yelled at them in Sinhalese, or Tamil, then turned to me with a smile and chose a few more smooth stones before throwing. The pebbles bounced off their backs like a beggar’s glance. Or unanswered prayers.

I don’t know when the drums started pounding, but I know that they pounded as the priest came from the temple carrying a large plant on his head, trailing a tail of men all wearing robes that covered only their waists. And the chanting. And the shouting. And more tending of the angry fire.

When the men began walking across the coals, the crowd made one last surge, and any form of individual was swallowed in it, and no one could stop it: not the police, not the men tending the fire, not even the fire itself. They pressed so close as to be scorched by the heat. Then the frantic crossing, the fast walk trying to stay just ahead of the burn, the shouting and feet plunging into water and in the background, always in the background, that shimmering image of the crowd, distorted by the waves of heat rising.

Fathers walked through the fire carrying children, and we looked at one another, and we raised our eyebrows, and we thought their devotion had strayed into the land of the fanatic. Why would anyone carry their child over those coals?

Then we pulled ourselves from the crowd that pressed in around us. There was a moment of near-panic, when we wondered if we could move. But the crowd released us reluctantly. We circled around it, trying to find our way to the car, and my feet felt stiff in the reflection of all those bare soles, all those eyes burning with devotion.

Two days later I sat in the shade of a tree with the boy I sponsor. To my right, the boy’s father: a large man with a massive mustache. He could have snapped me in two with a glance, but his shoulders were soft and his eyes carried decades’ of smoking embers. To my left, his wife, beautiful and quiet. Even though she spoke a language foreign to me, I could understand her by the way she moved her chin: down in embarrassment, to one side or the other depending on her level of agreement, or up with pride.

Their two-year-old son, not much smaller than my own boy 9000 miles away, refused to meet my gaze. He knew his eyes would give him away.

The father told me that eleven years before he had made a promise to the gods: help me to have children, he had prayed, and I will walk my firsborn through the fire. Two years later, he did it, forging through the coals and the shimmering waves and that organism called the crowd. And he carried his oldest son, thankful. Repaying his debt.

I stared at the two-year-old and I wondered about his older brother who had been carried through the heat and even there, in the shade of a tree, surrounded by giggling children and talking through the medium of a translator, I did not know what to say in the face of that kind of devotion.

So I said nothing. I leaned over next to the small boy and I handed him a box of colored pencils, and I opened the sketch pad, and we scribbled color on to the page. Blue the color of devotion, and green the plant the priest carried. Brown for the sound of the crowd.

And red, the color of burning coals.