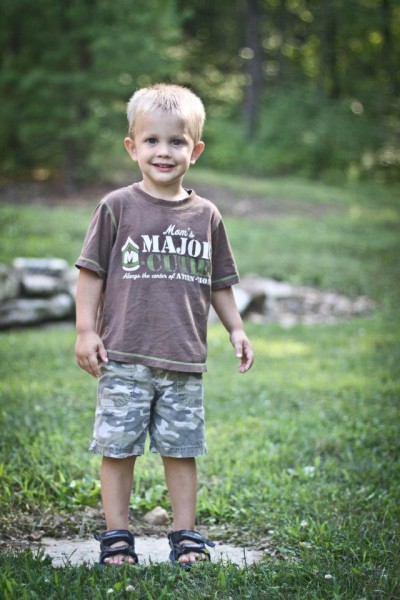 Sam screamed again. It was late, and he was exhausted, and through that thin veil of tiredness his anger broke through. He sat in his bed, and he wailed. Sometimes his cries took the form of a long, drawn-out “Nooooooooooo” to no one in particular – at other times they came out in short, staccato bursts.

I heard him from the kitchen and flew into the room, prepared to drop the hammer. I couldn’t imagine any situation in which this kind of screaming was necessary or acceptable. Then I turned the corner.

His little face was red, his jaw clenched. Hot tears filled his eyes. I scooped him from his bed and stared at him, prepared to say, once again, “No! This is not cool!” But I found myself saying something entirely different.

First I hugged him. His legs stuck straight down like tiny two-by-fours, and his arms stayed stiff at his side. I held him as close as I could, and I whispered into his ear.

I’m learning this: it’s okay to be angry.

I grew up in a charismatic, evangelical church in an Anabaptist community – anger has always been totally unacceptable. Displays of anger were considered a complete loss of control. We tried to pretend to accept anger by saying, “Anger’s okay as long as you don’t act on it,” but that’s just another way of saying that anger isn’t okay, because anger nearly always drives us to some sort of action.

But all this denying has only fostered a form of passive-aggressive behavior – anger can’t be held inside. It always emerges, usually later, usually misdirected.

I’m learning this: it’s okay to be angry.

And each time I said that, I felt his little muscles loosen. His enraged screams turned to heartfelt whimpers and then those trembling sobs. I know it’s a worn out cliche, but he literally melted in my arms.

Then I slid into the bed with him on my chest. Every so often, his little body would seize up as the anger resurfaced, then he would shudder, take a deep breath, and sigh again. Relax.

“It’s okay,” I whispered again and again. “You can be angry if you want to. I’m just going to hold you.”

You can approach God honestly. You can scream at him and tell him how unfair your life is and how it doesn’t seem like he’s there. You can question him and demand answers. You can weep and blame him for your tears.

You can get angry at God.

He can handle it.