For Part One (In Which We Lose Our Brakes at 8400 Feet), click HERE

We pulled away from the scenic view at the top of Teton Pass. Breathless. Anxious. Eager to have the ensuing four-mile descent behind us.

It wasn’t long before I realized we would be fortunate to make this stretch without incident. Even in first gear, I had to use my brakes too often, too hard. The air pressure dropped. The brakes smelled hot after just half a mile.

I pulled into a side pull-off area to give the bus a rest, and my parking brake barely engaged. Adrenaline left me feeling shaky. I opened the bus door. The cold air felt great, and behind us the mountain side was covered in snow, but both were contrasted by the smell of hot brakes. The smell of something important not going well.

After ten minutes or so, I released the brake and began creeping forward. The brakes felt okay, but not quite right. I had no idea what to do, but then I saw another pull-off a few hundred yards ahead. I decided to pull in there and park for an hour, let the brakes cool completely. We might take all day getting down. Oh, well.

By now Maile and the three older kids sat just behind me. Sam napped in the back. The kids chattered on and on about the view, the trees, and the bears they wanted to see. It was surreal – inside, I felt a massive sense of tension nearing panic, yet just behind me the kids were having a great trip. They had no idea.

But Maile – I could tell she knew what was going on. She asked me short questions in a quiet voice as we crept along at 5 mph, questions that I had no answer for.

“Should we pull off?”

I pulled our 20,000 pounds into that next pull-off, preparing to stop, put on the parking brake, and wait until the brakes cooled. But it was at that moment I realized we couldn’t stop, at least not completely. I pushed the brake all the way to the floor, but we kept coasting, a snail’s pace really. It’s amazing how such fear can rise up in the face of such a slow movement. In a last ditch effort, I pulled on the parking brake, but it did nothing. We kept coasting forward.

A guardrail defined the next curve, to the left, a hundred yards or so in front of us. Beyond the road, a thousand feet of air and rock and evergreens. Beyond that, the town we couldn’t always see, like a tiny model village. Far beyond that, more snow-capped mountains.

Faster. Now we were going fifteen miles per hour. We came around the turn. I began calculating at what point I would need to wreck the bus into the side of the mountain. The brakes were no longer slowing us. Then we saw it – on the left, a runaway truck ramp, the kind I used to always look at and think, Seriously? People actually use those?

“Should we go in there?” Maile asked me. I didn’t want to. For a second my mind weighed up the costs – getting stuck on the ramp, having to get a tow truck. Surely things hadn’t gotten that bad? Then, in that same second, my brain calculated the alternative. There was no alternative. We couldn’t stop.

A few cars flew past us on their way up the mountain. A large gap in the sparse traffic let me cross to the left hand lane. We approached the runaway truck ramp. I committed to it, veering to the left. We hit the ramp at 15-20 mph, and the bus quickly sank into the loose gravel.

For Maile’s take on this near-disaster (and the way it can change your faith), check out her blog HERE. Come on by tomorrow for the final installment, in which we get off of this crazy mountain and move on with our lives. Sort of. 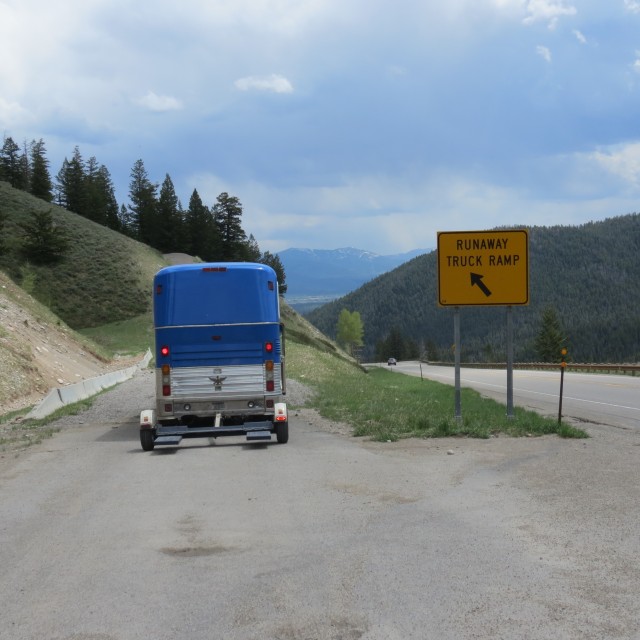 8 Replies to “The Drive To Yellowstone, Part Two: Using a Runaway Truck Ramp”