The bus ground to a stop among the loose stones of the runaway truck ramp. My hands shook as I took them away from the steering wheel and placed them in my lap. My legs trembled as they let off the brake, and the burning smell of those brakes caught up to us, enveloped us, reminded us of how bad it might have been.

I looked back at Maile. Her eyes seemed stuck open, unblinking.

“That could have been really, really bad,” she said, her voice wavering.

She took the kids to the back of the bus and turned on a movie. I went out and walked around the bus. Smoke came out from behind the front wheels. So relatively slow had our approach to the runaway truck ramp been, and so effective the 8-inch thick layer of loose pebbles in slowing us, that the bus hadn’t even gone all the way in. Our back tires were still on pavement.

I looked out over the incredible view again – the trees and the cliffs and the mountains. Everything was completely still. Peaceful.

The next few hours passed in a post-adrenaline haze. The nicest officer in the world stopped and made sure we were okay, then called for the largest wrecker they could find. He invited me to sit in his car while he wrote up the report. Every once in a while he looked at me without saying a word, then shook his head in amazement and looked away. After doing that two or three times, he finally spoke.

“You do realize how lucky you are, right? How bad that could have been?”

I nodded, feeling a bit choked up, and looked out the window, up the mountain, in the direction from which we had come.

A few hours later the truck arrived. Two men were in it. One of them, a long-haired mountain man with a six-inch goatee and a few missing teeth, stared up into the bus at Maile.

“Everyone okay?” he asked in a genuine voice.

“White-knuckled it there for a bit, I guess?”

She nodded again, biting her lip.

We waited in the minivan at the bottom of the mountain and took a picture of the truck as it brought Willie down to us.

After a long discussion with the tow-truck driver, and testing the brakes, we went on our merry way. By now it was past 5pm, but we thought we’d still try to make it to Yellowstone, a few hours away.

Just outside of Jackson Hole a herd of bison crossed the road in front of us. The kids all crowded to the front. The huge beasts, from some other time period, lumbered slowly up on to the asphalt, then into the huge expanse of grass on the other side. It was beautiful. Breathtaking. Surreal.

Out of this silence spoke Cade, our prophet, and he summed up the whole day in one sentence.

“We must be the luckiest family in the world.” 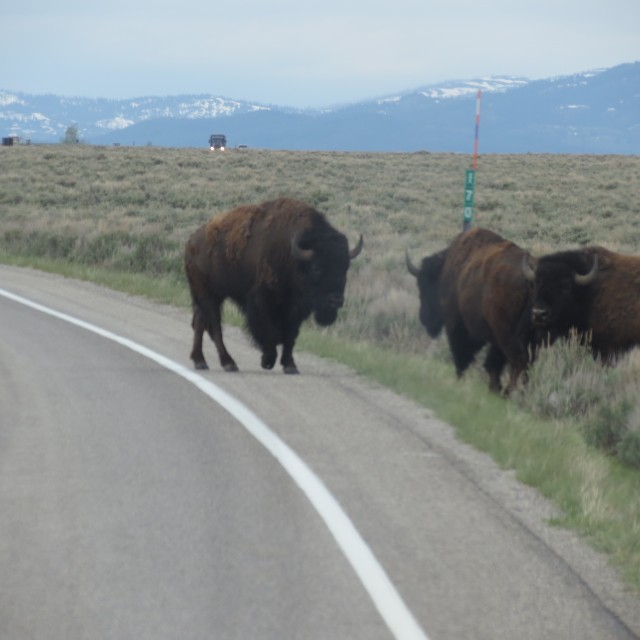 33 Replies to “The Drive to Yellowstone, Final Part: Getting Off the Mountain”