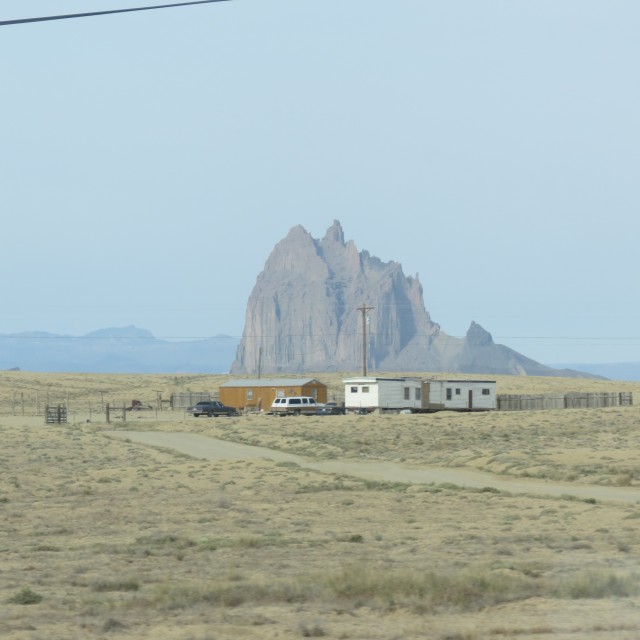 I meandered up to the small food shack. It was nothing more than a metal concession trailer with a plywood room somehow fastened alongside. Inside, a makeshift counter ran along the walls. Country music scratched out from an old portable radio.

I had never expected Arizona to be so cold in April, but a cool desert breeze dashed along the rocks and the dirt and the plateaus, felt more like a late-fall morning in Pennsylvania. The market surrounding the Four Corners monument had only begun to wake up. Vendors pulled up in their pick-up trucks, held steaming cups of coffee, chatted with one another, and shrugged their shoulders at the slow start to the day.

I ducked into the small shelter and put my arms up on the counter. Two iron skillets waited on unlit gas burners. A woman emerged from the corner of the aged, clean kitchen. Her black hair reminded me of the dark night we had driven through to get there. She offered me a reserved smile, a small row of the whitest teeth shining through her plump, tan skin. It was obvious that her ancestors were the original occupants of this immense land.

“What can I get you?” she asked quietly. No pretense. No sappy customer service. Simply a question that needed answering.

“I’d like an order of fried bread with powdered sugar,” I said.

“It will be just a few minutes,” she replied, turning her back.

Waiting for my order (the sign declared it a Native American specialty), I wandered back out into the hot sun, felt the cold breeze, and stared out into a foreign landscape. I might as well have strayed on to another planet.

The ground was formed out of pebbles, and dust. These created a soil that supported small, hearty shrubs and larger rocks, which in turn held up mesas and plateaus. This order of things remained uninterrupted to the horizon. To the south, a massive mountain. Far to the east, barely visible, snow-capped peaks.

I saw only one house, tucked in a deep valley created by steep-edged mounds of rock and earth. The mobile home held tightly to a fence, five cars and a few ramshackle outbuildings. That’s it. One house by itself in thousands of acres.

There is something about the west that immediately grabbed on to my heart. The open, rugged terrain awakened something in me, something adventurous and hopeful. The physical emptiness left room for a spirituality that filled the wind and the sky. It was a beautiful, mystical, foreboding place.

The kind of place where anything could happen.

We drove through Navajo country all day. The few small towns we encountered were random scatterings of mobile homes. Each surrounded by a fence. Piles of tires. Cars on blocks. Chained dogs sleeping in the dust.

We passed a hitchhiker once. 150 years ago he would have been a Brave on a beautiful horse, proud and stern. But in this world, and in this time, he didn’t even raise his thumb to us. Just leaned back against the road sign and crossed his legs, his tattered clothes grabbing on to the red dirt. He reached up and licked the tip of his thumb, as if preparing to separate two thin sheets of paper. Our eyes met as the bus passed.

Maile took a picture of a rocky outcropping, the kind you get used to seeing while driving through that part of the country. It grew up out of the ground like a massive plant, or a pillar holding up the temple that is this earth.

In the foreground of the stone monument sat yet another trailer. A few old cars. It was as if the present reality is still overshadowed by what was, and what might have been.