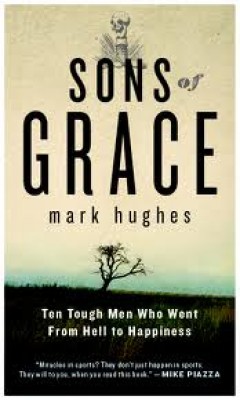 This guest post comes to you via Mark Hughes, author of Buzz Marketing and Sons of Grace. I had the privilege of hearing him speak at the Killer Tribes conference in Nashville last weekend – his message was both practical and inspirational. If you’d like to win a free copy of Sons of Grace, leave a comment below.

Walk into any bar, barbershop or salon and you’re guaranteed to get an earful of opinions. How many times have you heard discussions beginning with “What we ought to do is…” and how often does this talk lead anywhere?

Whether you’re leading a Fortune 500 company or work for the Post Office, you probably envision the future being different–and better than the present.

I have a friend who was an enforcer in a motorcycle gang now doing a 50 year term for murder, but we’ll get to that later.

Right now there’s a line in a movie that may capture sentiment in your life:  “I’ve finally embraced the life I never wanted.”

But every beginning has an ending, and every ending has a new beginning.  It can happen every day.  Tomorrow is a new beginning, and rather than rejecting the life you never wanted, we need to act like professional athletes.  We need to have the courage to play this game of life hurt—getting on the field, and playing through the pain.  Winston Churchill said, “If you’re walking through Hell, keep walking.”

My friend Ron Gruber (“The Motorcycle Gang Member” in the book Sons of Grace) had to develop this quality at an early age. Raised with a sadistically abusive father, courage was something he needed simply to make it from one day to the next:

“You see, I had to learn right out of the gate that a coward will always stop short of crossing the line, allowing himself to think, ‘Don’t do it…you might get hurt.’  For any normal person, this would be called a healthy survival instinct.  But beginning at seven, I had to learn that a winner forces himself beyond any common-sense fear to emerge victorious.  To find the courage I needed to survive, I was forced to abandon normal understanding of good and evil and race into an unfeeling zone that the average man on the street knows nothing about and, hopefully, never will.  That zone would become the major influence in the choices I made in life; both bad and, in the end, good.”

Courage isn’t the same as good judgment.  Ron’s overdeveloped sense of courage that enabled him to win respect from the wrong kinds of people, often by committing atrocious deeds eventually landing him in prison for murder.

Ron’s story seems to blow everyone away—you can read it for free here.  It teaches us some important lessons about courage:

1.    Courage is a decision. Ron brings this into focus when he talks about “crossing the line.” I like to think about this line being the border between thought and action, between what you know and what you do. If you’ve ever jumped into a cold lake then you know exactly what I mean – right before every courageous act is a moment where you understand that this move may have consequences beyond your ability to understand, and that there’s no turning back after the fact. Then you go ahead and do it.

2.    Courage means making yourself vulnerable. There’s an old adage that courage isn’t the absence of fear but the ability to persevere in the face of fear. Whatever it is that you are afraid of – public humiliation, taking a financial loss, or even death – you can’t properly exercise courage unless you expose yourself to it. After all, if you aren’t taking yourself out of your safety zone, then there really isn’t anything brave about what you are doing. But when you do make yourself vulnerable a curious thing happens: you don’t lose fear, but the fear loses its power over you. You gain power, in a sense, by renouncing control.

3.    Courage is a rare trait. There is a reason why we’re naturally drawn to leaders who display courage. It’s not easy! It is counterintuitive, and often requires us to go against the gravitational forces of everything we know.  But everyone will face situations in life that will require responding with true courage. Whether and how you choose to respond when this moment comes for you will depend on your ability to recognize courage not only where it’s already present, but where it is needed.

Have you embraced the life you never wanted—coupled with the fear that comes with it…and the courage that overcomes it?