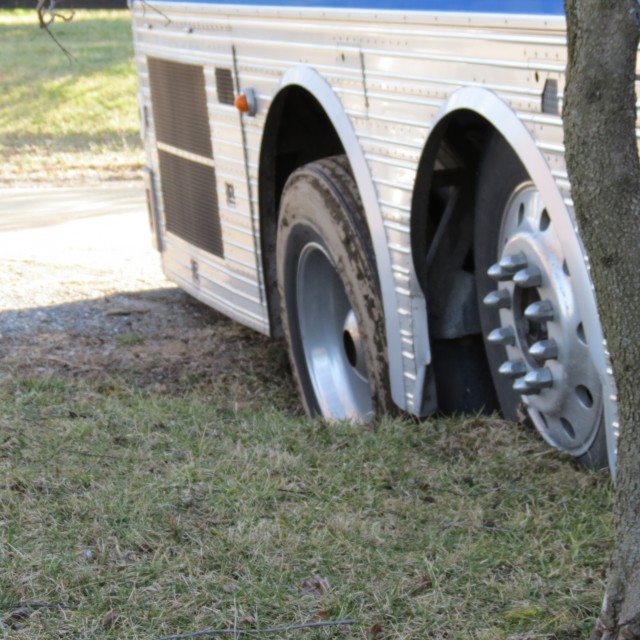 I stood on the narrow road, leaning against my minivan. A layer of grit covered the hood, and we had only traveled a few hundred miles. It was Friday, an unseasonably warm day with a cool breeze and a bright sun. The blueness of the sky seeped down through the trees.

But all that I felt was discouragement and disgust and anger. In front of me, twenty yards up the road, our bus was stuck.

Thirty minutes before that, I drove down a country road somewhere between the Maryland-Virginia state line and Waterford, Virginia. The countryside, a series of horse farms sprawled out over rolling hills, was gorgeous. But the further we went, the more stressed out I got. Those were exactly the kinds of roads I had hoped to avoid: one and a half lanes wide, shoulderless, lined with banks.

Then we arrived at the lane to our friends’ house: a narrow stone driveway bordered by trees. I had a very bad feeling. But I crept forward.

In my first attempt I came in a little shallow, so I backed up a few feet and tried to swing in again. Everything in my mind said stop, but I didn’t want to think about it. I just wanted to do it. I tried to back up again. The bus wasn’t moving. I checked my mirrors, noticing for the first time the small drainage ditch to the right of the driveway. My rear right wheels spun.

It’s hard to explain the rage and frustration that rose up in my mind. I’m not one who usually experiences much anger. I’m generally a mellow sort of guy. But I was mad, the curtain kind of mad that clouds your brain and numbs control. I may or may not have dropped a few f-bombs in my mind. I stormed out of the bus and surveyed the situation. There was no way I was getting out of that ditch on my own.

At some point during the next ten minutes I basically kicked Maile and the kids out of the bus and told them to go to our friends’ house at the end of the lane. Then I called AAA, but we had just enrolled in the RV plan and it wouldn’t take affect for 7 days. They forwarded me to a local towing company. The guy said he’d be there in 45 minutes – he had to go back and get the big truck.

I sat in the bus, waiting for the tow truck, cursing my luck over and over again. Then, in the midst of my temper tantrum, I felt this voice speaking to me inside of my head.

I was so mad I didn’t want to listen, so for a few minutes I stayed in the driver’s seat, staring up the road, willing that tow truck to appear. But the voice didn’t let up – it didn’t get louder, but it also didn’t stop.

Finally, I listened. I stumbled out of the leaning bus and walked through the soft grass to where my van sat on the shoulder of the road. I stared at Willie (the name we’ve decided on for the bus), and for a moment rage threatened to consume me again. But then I stopped. I looked up at the sky, at the blue dripping through the trees, at the spring clouds somehow lost and floating through a February day.

And I waited peacefully. I took some deep breaths. I closed my eyes.

Maile made her way hesitantly out the lane. She walked over to where I leaned against the van and sat on the bumper beside me.

“You know,” she said quietly. “That’s the thing about adventures. The stuff that happens isn’t always easy. It’s not always fun. But it’s always worth telling.”

I looked at her and shook my head – how could I have missed that? She was right, of course. Adventures are only adventures when it’s possible for things to go horribly wrong. I thought of the Tolkien quote my friend Dave had put on my Facebook page not too many days before that:

It’s a dangerous business, going out your front door. But it’s worth it.

We’re unstuck now. Have been for a few days – the tow truck came and tugged me out, easy as pie. It’s 10:35 pm on Sunday. The generator hums under the bus. The kids sleep in their bunks. Maile is asleep back in the bedroom. I’m sitting out front, listening to the heat go on and off, listening to The National, listening.

Sometimes that’s the only way to get unstuck, I guess. Just stop and listen.