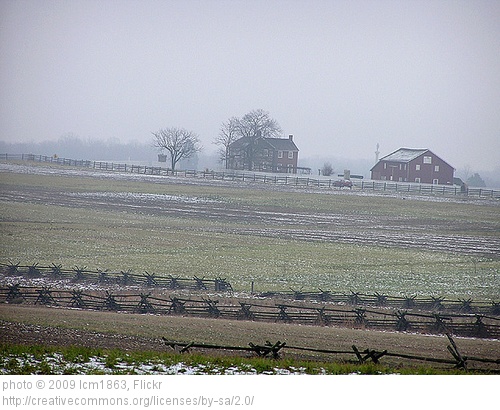 Wednesday was a rainy day in Gettysburg, but it seems appropriate weather when contemplating the history of the place. Nearly 50,000 of the 164,000 combatants in the Battle of Gettysburg lost their lives during the three-day hell. The hills and forests must have been literally slick with blood and littered with bodies.

It’s a strange thing, driving these roads, looking out over the fields. I wonder how the people felt as the armies assembled. As the cannons began to boom. As distant gunfire whizzed through the air like a host of demons.

Approximately 148 years ago, and only a few months after the battle, a somber man stood before a crowd of people in central Pennsylvania and gave a two minute speech. So little was expected of it that the five remaining manuscripts show discrepancies and even differ from some of the newspaper accounts from that time.

He gave a speech about the great civil war that raged on and how it tested our nation’s resolve.

And I wonder about our nation now.

That’s one thing I’d like to find on this trip: signs of unity. Churches working with those who do not believe in God; liberals and conservatives coming together for the common good; very different people serving with one another to accomplish what they could not have achieved separately.

I’ll let you know if we find it.

In the mean time, take a moment to read Lincoln’s speech:

Four score and seven years ago our fathers brought forth on this continent, a new nation, conceived in Liberty, and dedicated to the proposition that all men are created equal.

Now we are engaged in a great civil war, testing whether that nation, or any nation so conceived and so dedicated, can long endure. We are met on a great battle-field of that war. We have come to dedicate a portion of that field, as a final resting place for those who here gave their lives that that nation might live. It is altogether fitting and proper that we should do this.

But, in a larger sense, we can not dedicate — we can not consecrate — we can not hallow — this ground. The brave men, living and dead, who struggled here, have consecrated it, far above our poor power to add or detract. The world will little note, nor long remember what we say here, but it can never forget what they did here. It is for us the living, rather, to be dedicated here to the unfinished work which they who fought here have thus far so nobly advanced. It is rather for us to be here dedicated to the great task remaining before us — that from these honored dead we take increased devotion to that cause for which they gave the last full measure of devotion — that we here highly resolve that these dead shall not have died in vain — that this nation, under God, shall have a new birth of freedom — and that government of the people, by the people, for the people, shall not perish from the earth.

Check out Maile’s take on Gettysburg and why it seems an appropriate place to start off our trip.

Also, Leigh Kramer is graciously allowing me to guest post in her new series, “This is How We Met,” and I’m sharing the story of how Maile and I met. You can check that out HERE.