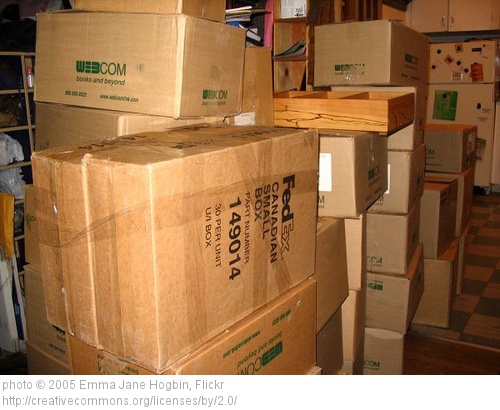 If someone did time-lapse photography of the inside of our house right now, you would see this: cardboard boxes and plastic containers entering the house, some empty, some flat. Then the boxes and containers would begin eating everything we own, stuffing themselves. Finally, they stumble into one corner and sit there, satiated.

Every two years this feast for the boxes takes place.

In 1999, Maile and I moved to Florida. I overindulged in Cheerwhine and we argued with our friend Ryan Swain as to whether or not the small(ish) round fruit growing on trees in our backyard were lemons or oranges. We spent most of our time there carefree, newly married, and a little homesick.

In 2001, we moved to a small cottage named Rocketer in the English countryside (they name their houses over there).

We helped start a business. We grew to love London, bangers and mash, and Indian food. We had our first child and brought him home to a nursery with a back window through which we could hear the lambs bleating in the spring. We argued with our friends regarding the reason so few Americans have their passports. We spent most of our time amazed, stressed out with the business, and somewhat homesick.

In 2003, we moved into an even smaller cottage in Wendover, only a few miles away. We walked into town for groceries and spent Sunday afternoons walking along a narrow canal, watching the ducks. We had our second child at the small hospital a few miles away.

I ran a business and we found a church we loved. The babies became toddlers. I wrote my first book.

In 2007, we moved to a different house, same neighborhood. The business started to slide. We had two more babies. Our friends grew closer. I grew more stressed out. I wrote my second book. Our debt simply grew.

In 2009, we moved into my parent’s basement because we were so far in debt we couldn’t breathe. The six of us settled into subterranean life as I tried to make a living as a writer. It was an amazing adventure. In 2010 we moved into a lovely little house in the country with a garden and a stream and woods and something that felt like hope.

And now, two years later, we are moving again. This time into a bus for four months and then, after that, who knows where. Maybe back into this neighborhood, where I grew up. Maybe into Lancaster City. Maybe into a cabin somewhere between here and California. Who knows.

I’m so ready to be on the road.

I’m not much for complaining, but today I need some fellow whiners…anyone else out there tired? What are you tired of?

19 Replies to “Every Two Years It Happens”