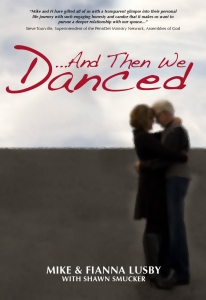 The following is an excerpt from my latest project, a book I co-wrote with Mike and Fi Lusby titled, And Then We Danced. The chapters are told in alternating perspectives throughout the book, first from Fi, then from Mike. This particular chapter is told from Mike’s perspective. You can find out more about the book or order it on my website or on Amazon. Here is an excerpt from the book:

“If I didn’t know any better,” I said casually, “I’d think you and our pastor are having an affair.”

Her voice came out smooth and relaxed.

“Oh, honey, you don’t ever have to worry about that.”

Somehow I knew she was lying. I don’t know how I knew, but I did. Yet, I couldn’t admit it fully to myself. That she might be having an affair remained a remote possibility in my mind, and no matter how the facts lined up, no matter how sure I was that they were together, something inside of me still hoped that I was wrong.

That was the last time that I asked her about it.

Eventually, Fi’s two sisters moved down with their husbands. We started gathering our little church together – I studied to become an ordained minister, and after our pastor arrived, he brought me on as his right-hand man, the associate pastor. I was excited to finally be in full-time ministry.

One thing started to bother me, though: my wife was never at home when I got back from work. No matter what time I walked through that front door, she wasn’t there. Each time I entered an empty house, my suspicions became stronger and stronger. I usually waited at home for an hour or more before she arrived. It became increasingly difficult for me to listen to the voice that said, “But what if she’s not doing anything? Maybe she’s innocent.”

That voice faded until I could barely hear it.

Finally, I came home one day and reached my limit. I must have had a bad day at work, but when I arrived at the house and she wasn’t there, I lost it. The only person I could talk to was God, and he got an earful.

“You know what?” I said. “I’m sick of this. I’m not doing it any longer. I can’t live with Fi knowing that she is running around on me! I’m too tired. I’m going into the bathroom and taking a shower, and if she’s not here by the time I get out of the shower, I’m packing up and leaving.”

I went into the bedroom and got ready to shower. I hadn’t given staying much of a chance, seeing that she rarely got home in time for dinner. But as I stepped into the shower, I heard something that surprised me.

The front door closed. Fi was home. She never came home that early. The hot water relaxed my body. Right there, in the shower, I felt God communicating to me as clearly as ever before.

I felt the tears rising to my cheeks, a product of frustration and weariness, but he said it again.

“Mike, if you will let me, I will take care of this for you.”

Right then and there, I relaxed.

After that, I decided I would never question her again. I wouldn’t ask her if she was cheating on me or why she treated me the way she did. I wouldn’t ask her where she had been or who she spent her time with. Besides, what would I do if she told me the truth?

My way of handling the entire situation would never be perfect – I had no idea what I was supposed to do, what the right thing was to do, or even what I wanted to do. I knew that God could do a much better job of taking care of the situation than I could, so in that area of my life, I sat back and I waited.

4 Replies to “An Excerpt From My Latest Book Project”